Each bite tells the story of a person and a place and a time; it evokes a memory. And this is the story of my grandmother’s strawberry preserves. 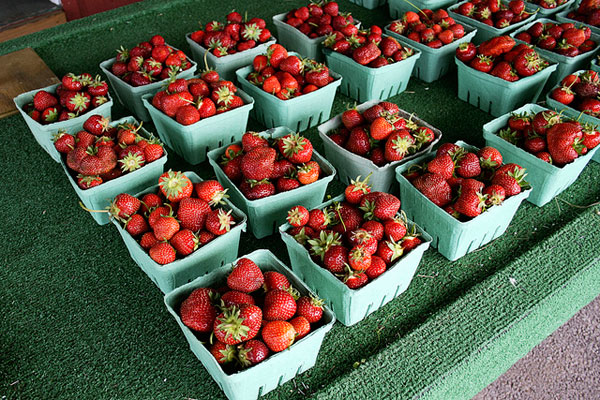 Grandma grew up in a row home in the city. She carried pretty purses and went dancing with her girlfriends on Friday nights. Then she met my grandfather, who lived on a farm. He drove tractors and baled hay and milked cows. They were an unlikely couple — but a perfect one.

For years after they were married, Grandma and Grandpa worked as farmhands. Grandma learned to raise chickens and tend to an orchard and, on more than one occasion, could be found chasing pigs down the road with broomsticks. It may not have been the life she originally envisioned for herself, but it has been one filled with much love and happiness. 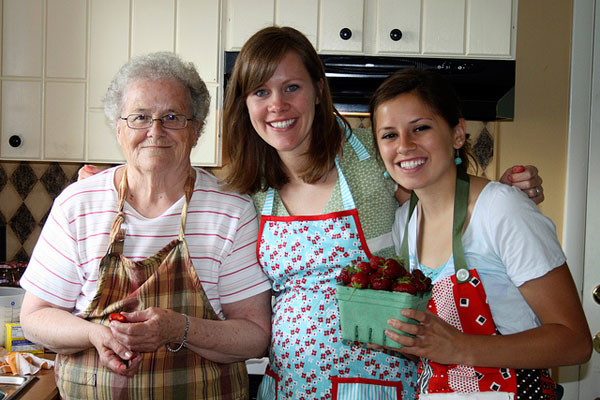 Somewhere along the way, Grandma also learned to make strawberry preserves. Grandpa filled boxes with ripe red berries from their backyard and Grandma would blend them, boil them, and preserve them in jars. It was a skill she taught herself and one I’ve wanted to learn for many years. Finally, over Memorial Day weekend, she shared her recipe with me and my sister.

Before we got started, though, she wanted to make sure we knew the difference between preserves and jams and jellies. Preserves contain chunks of fruit, whereas jams and jellies do not. So despite calling Grandma’s creation “strawberry jelly” for almost 29 years, it is in fact “strawberry preserves.”

After she clarified that, we got to work.

First, Grandma showed us how to sort and clean the berries. “The redder, the better,” she said. “If they’re too pink, they may not yet be ripe enough.”

Then she put me in charge of stemming them, making sure I didn’t let anything good go to waste. 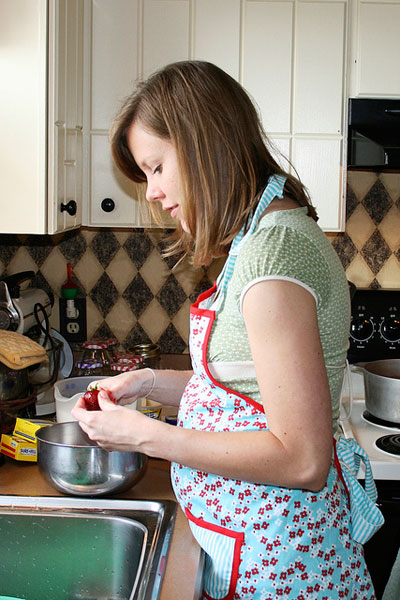 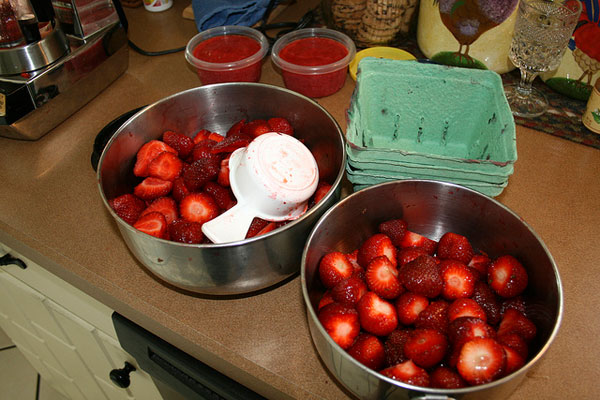 Laura then took the sliced berries, measured them (5 cups total), and added them to the blender — a blender that I suspect is older than me. 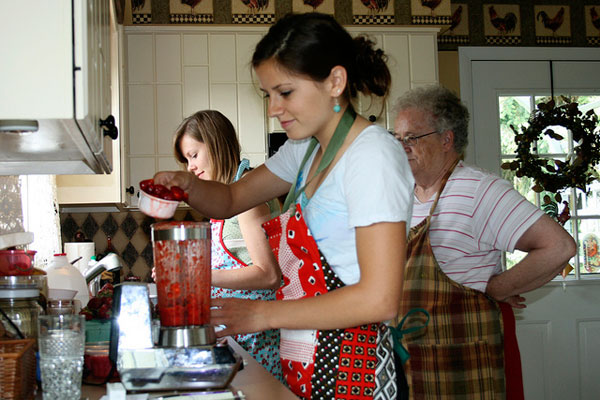 Next it was time to measure the sugar. And Grandma shared another tip — one that is especially helpful for this forgetful pregnant lady. She suggested we use toothpicks to count the cups. So measure one cup of sugar, place one toothpick in the pile. Measure a second cup of sugar, place a second toothpick in the pile. Repeat until you reach the necessary 7 cups. (Yes, 7 cups. Things like lard in sugar cookies and real sugar in preserves are things you just don’t mess with.) 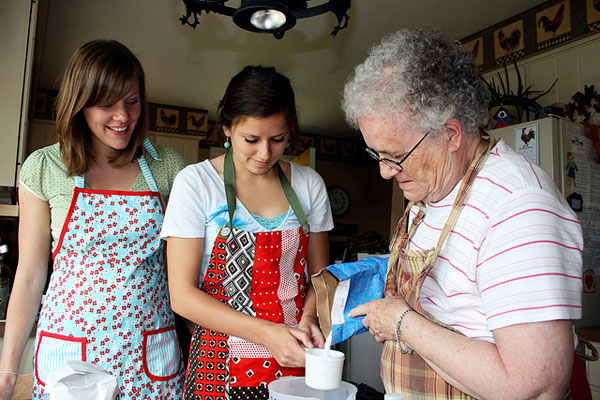 Meanwhile, in a heavy pot — one that Grandma has been using for several decades — Laura added 1 box of pectin to the 5 cups of strawberries. She also added 1/2 spoonful of butter to prevent the mixture from foaming and brought it to a full boil over high heat, stirring constantly.

Then she added the 7 cups of sugar and returned it to a boil. 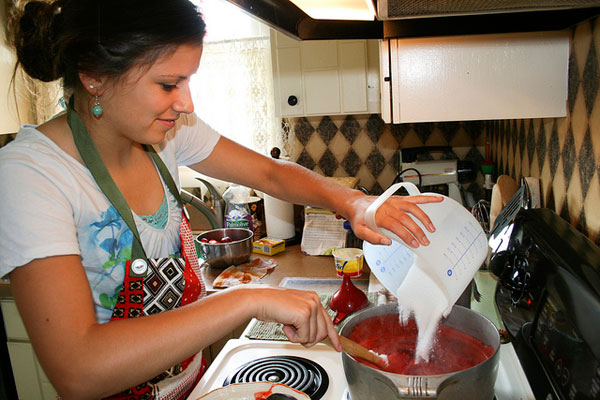 Grandma let it boil for exactly 1 minute, stirring constantly. Then she removed it from the heat and skimmed off any foam. 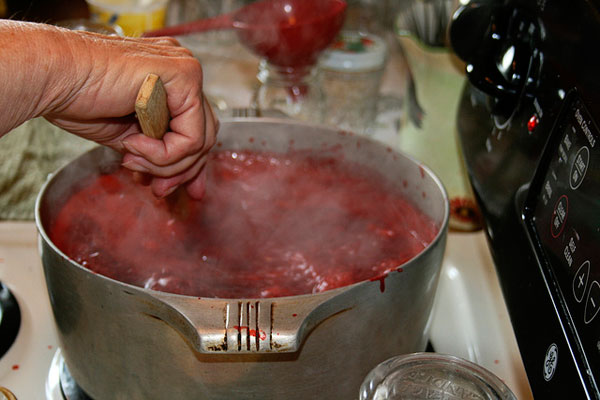 (Note: This photo was taken just 4 days before Grandpa’s kidney transplant! The surgery was successful, though he’s still recovering in the hospital. Thank you for keeping him in your thoughts and prayers!) 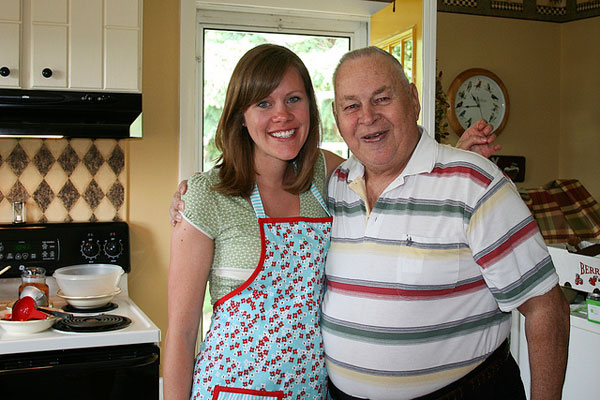 After a quick chat and snack, I took over and finished the second and third batches. 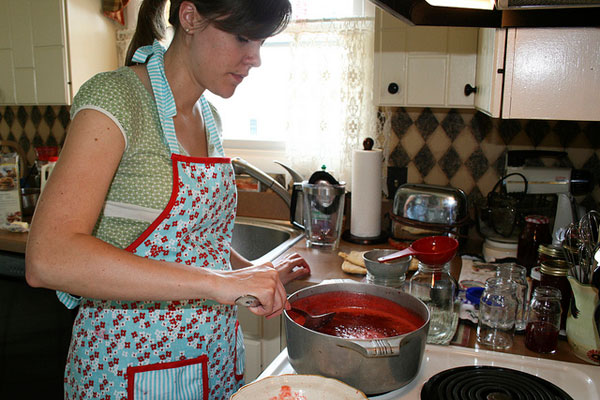 Grandma had washed the jars before we arrived, so they were ready to be filled. 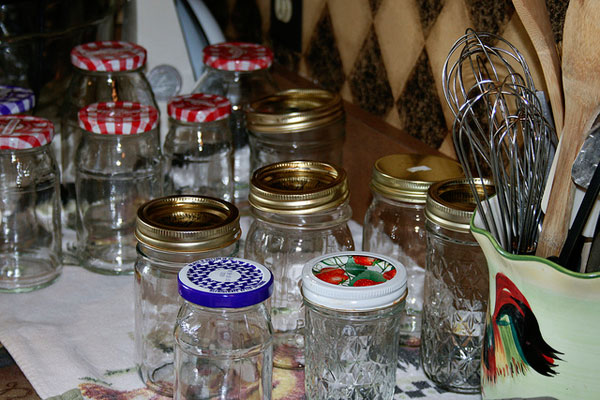 And fill them we did! We made about 20 jars total. And Grandma has plans to make a few more batches before the berries disappear from market stands. I do wish their season was a longer one! 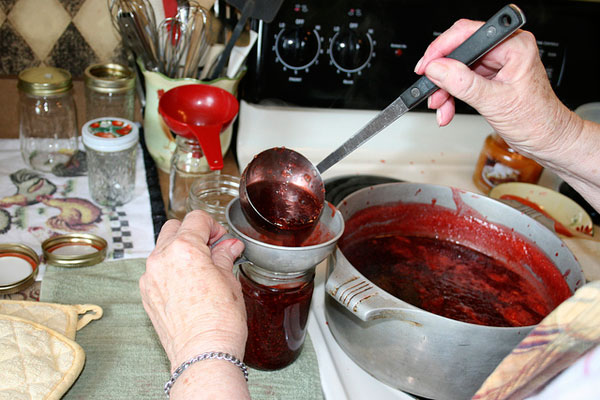 Every year, Grandma distributes jars of her preserves to each member of the family. We typically put one in the refrigerator and the others go into the freezer to (hopefully) last until next June. This year I was especially excited to line up the jars of shiny red sweetness. 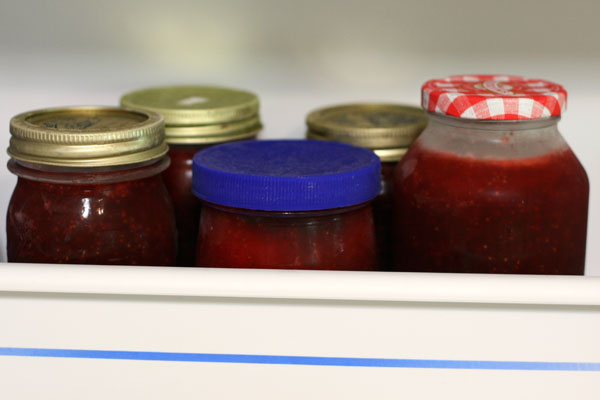 And of course I had to sample some as soon as I got home. Ahhh summer in a jar. With a side of peanut butter. 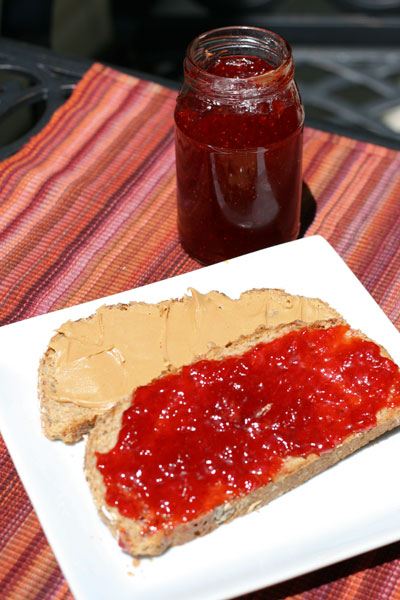 I could eat PB+Js daily. (Or perhaps I should call them PB+Ps for peanut butter and preserves?) 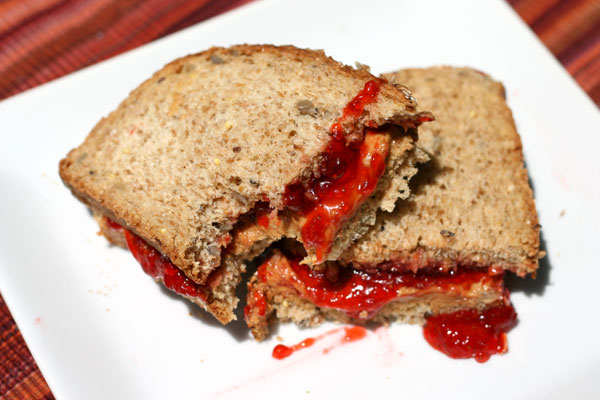 Thank you so much, Grandma, for spending your Monday with us and for sharing your knowledge. (Also thanks to my mother for playing photographer.) Hopefully next year Peanut can help! Because if he/she likes Grandma’s strawberry preserves as much as Nick and I do, we’re going to have to double our annual supply.