Sam has loved food since he had his first bite of avocado at four months old. He gobbles up everything we put on his plate — from mangoes and pears to broccoli and beans to lasagna and enchiladas. Okay, except for the time that Nick gave him a cilantro leaf. Though I’m actually surprised that he spit it out considering the amount of grass the kid tries to eat. 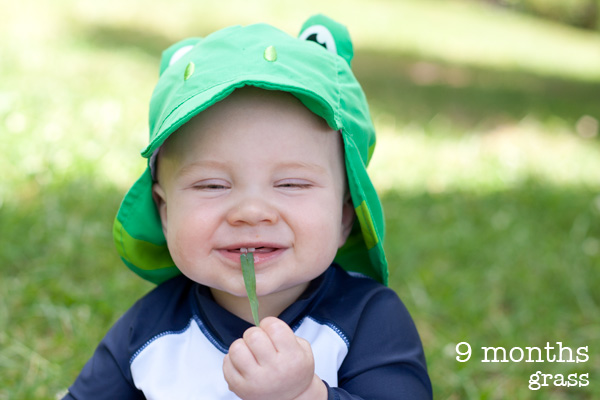 We’ve been following the Baby-Led Weaning approach since Sam turned six months old, and it really works for us. Sam eats what we eat, which makes mealtime easier and more enjoyable for all of us.

I’m excited to link up today with A Healthy Slice of Life to share some of our favorite Munchkin Meals!

Let’s start at the beginning, shall we?

We started Sam on purees at four months, per our doctor’s recommendation. The BLW approach says not to start anything until six months, and then to skip purees completely. I don’t regret doing it our way, though, because our little guy had lots of fun trying new flavors — even if he didn’t keep much of it in his mouth. But just before Sam turned six months, we phased out the purees and moved onto solids. 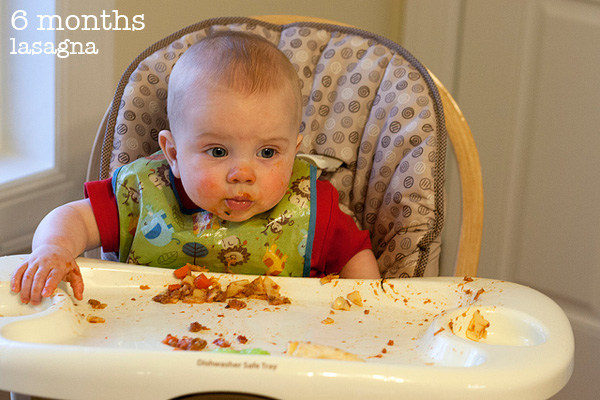 At six months, we also introduced starches like homemade banana muffins, waffles, toasted pita bread, etc. And we always gave him bits of our meals — like noodles from our soup, stewed tomatoes, even chicken tikka masala.

However, it didn’t take long for Sam to figure out how to bite off big chunks, which scared me. So I stopped the raw, hard foods and started to steam and roast everything and cut it into small pieces. 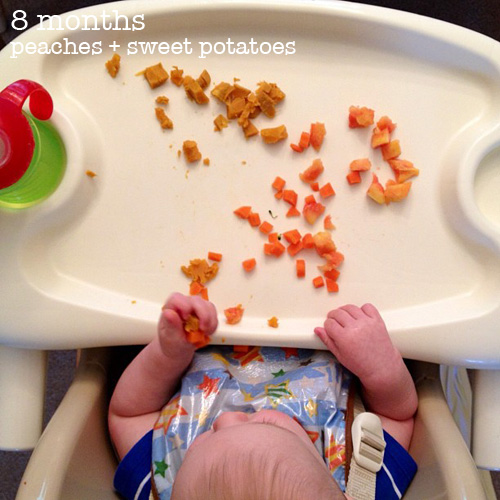 Yes, I had to get over my fear of gagging because it’s pretty much guaranteed to happen. But it’s important to know the difference between gagging and choking. As long as he’s coughing and making noises, then he’ll likely just spit out the piece of food. Or figure out how to chew it and swallow it. But that doesn’t mean it won’t give you a near heart attack! The BLW guide book does a pretty good job at addressing your concerns and boosting your confidence. (We have both the guide book and the cookbook.)

Now that Sam is almost nine months old (seriously, how did that happen?), I’m proud to say that he is a healthy and adventurous eater. With the exception of a few snacks that I keep on hand for traveling (puffs, yogurt melts, and puree pouches), he eats mini versions of our meals. And sometimes dessert, too. 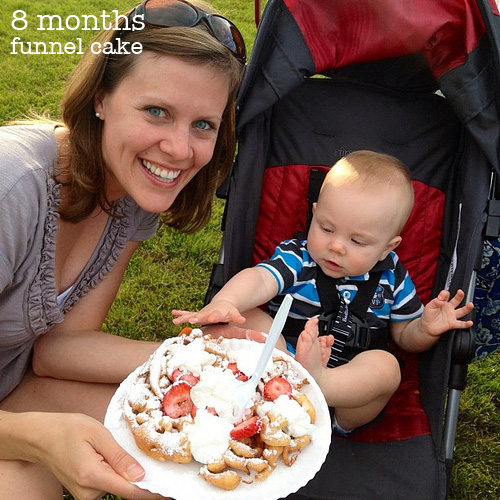 Here’s what a typical day looks like for Sam:

And a few staples:

I try to offer him a variety of foods, though he certainly has his favorites. If there is cheese or pasta on his tray, you can bet he’s going for that first. Tortellini, ravioli, macaroni and cheese — he stuffs his mouth and begs for more. He’s also a big fan of sweet fruits and most meats. He gets his own turkey burger when they’re on the menu and loves meatloaf (ours includes ground turkey, sweet Italian sausage, carrots, and zucchini). Also? Pickles. Just like his Daddy. 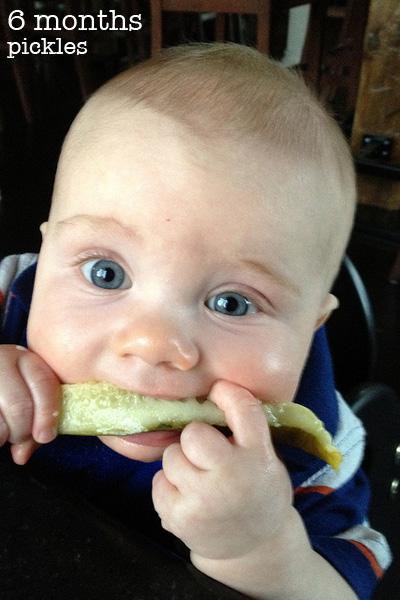 Sam has had eggs, berries, and salmon. Though we do plan to stay away from honey and peanut butter until he turns one. He drinks water from a sippy cup, and we will probably try whole milk soon. I also plan to continue to nurse until he’s at least 12 months old.

And while he hasn’t yet had chocolate — except for perhaps a few crumbs of cake and licks of ice cream — I suspect he’ll have a major sweet tooth just like his parents. 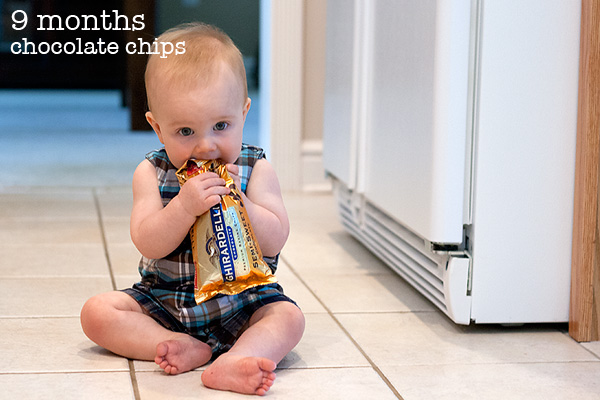 What does your munchkin eat? I’d love to get some new ideas! Link up with Brittany and share his/her favorites!