We had been planning to transition Sam to a big boy bed before baby sister arrives in January, but our little acrobat had his own timeline in mind. So we made the big move about a month before Sam turned two. Now here we are two months later, and I can honestly say that I am very proud of how our toddler handled the transition. Yes, there were a few bedtime battles, and he fell asleep on the floor more than once, but we’re all sleeping better — and safer — now.

Before Sam was born, we decided to purchase a convertible crib with the full size bed conversion kit. So as soon as he learned to climb out of his crib, we started to shop for a mattress. Every sales associate from every store we entered directed us to the cheapest options with the lowest coil count. But I decided that if there was any chance I’d ever have to sleep beside our son — or quietly climb out of his bed and stumble back to my own room in the middle of the night — I wanted something that didn’t creak and wake our sleeping angel. We finally settled on a firm, mid-priced mattress. And we plan to keep him on it until he turns 18!

While we waited for the mattress to arrive, we installed a safety gate at Sam’s bedroom door and secured all of his furniture to the walls. I bought soft jersey-knit sheets and a polka dot comforter for his new bed. And one week later, Nick picked up the mattress from the warehouse, and we were set to begin the transition.

Sam dusted the pieces of his crib that would become the headboard and footboard of his new bed, and he helped to hammer the wooden slats into place, and he only protested slightly when we removed the bird mobile that had hung in his room since the day he was born. 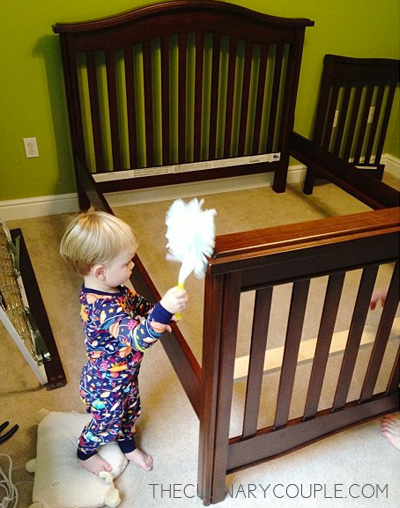 When the full size bed was assembled, and the box spring and mattress were in place, it looked gigantic. And very intimidating to our 27-pound kiddo.

I almost regretted our decision to skip the toddler bed until I learned that we could ditch the box spring, making its size much more manageable. (Check with your bed manufacturer and mattress dealer to find out if this is an option for you.) This, of course, created a subsequent problem.

Sam is a very active sleeper, and I worried that he might fall out of bed in the middle of the night. Unfortunately, the bed rail I had purchased did not work without a box spring. So I did some more research and found a great foam bumper that easily slides under the fitted sheet. I also put a pool noodle between his bed and the wall for a little extra security — and, I admit it, to prevent his binkies from disappearing!

With every piece finally in place, we were ready for our first night in the big boy bed. We talked with Sam about his friends and cousins and uncles who sleep in big boy beds and asked if he wanted to be just like them. Of course he did. But that didn’t stop the tears from falling when I attempted to tuck him in and leave the room. Two hours later — after a bowl of yogurt and a cup of water, a stack of books and puzzles, several songs, and at least a dozen times in and out of bed — he was finally asleep. 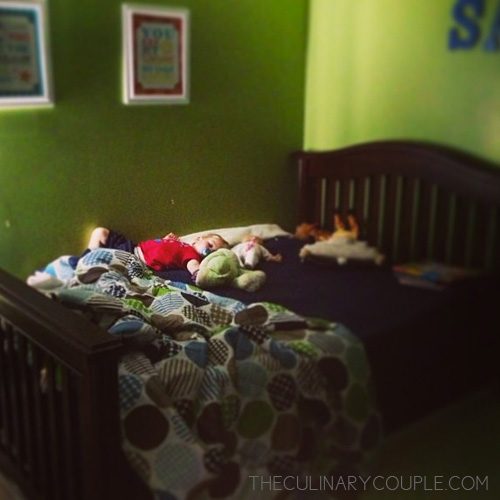 I felt like a new momma that night, waking up several times to check the video monitor. But he surprisingly stayed curled up in the corner with his stuffed frog until 7 a.m. the next day. Yes, he only slept for 8 hours when he typically sleeps for 10, but I deemed it a success.

The second night was a different story. He woke up crying at 2 a.m. and insisted I lay beside him. We talked and sang songs and read books. He tossed and turned. And before I knew it, it was 4:30 a.m. So I told him I had to go back to my big girl bed, and after about 15 minutes of crying, he fell asleep.

Nights 3 and 4 were challenging, too, and afternoon naps were all over the place. But by the fifth night, we had found our new routine. This new routine includes an episode of Mickey Mouse Clubhouse after bath, followed by at least three books in bed, two songs, and about five minutes of talking about our day. He typically doesn’t fall asleep until about 9pm, which was a difficult adjustment for this momma, but there are no longer tears or ridiculous requests or pleads for me to stay.

Change is never easy. But it is necessary. And I’m so happy that Sam is fully settled in his new bed months before baby girl arrives. Next mission? Ditch the binkies. Advice welcome!!! 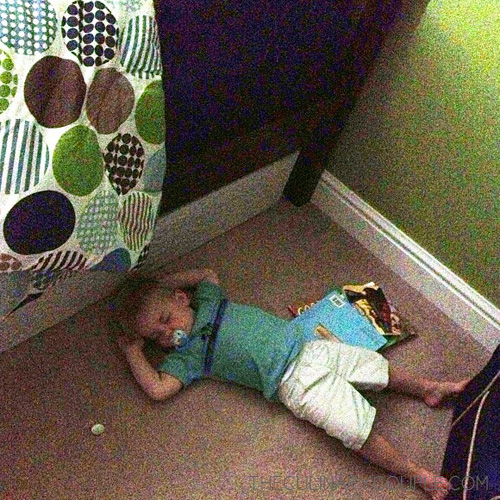 6 thoughts on “Transitioning our Toddler to a Big Boy Bed: Part 2”