Wednesday was our first and only day away from the resort. (Thanks, Mom and Dad Wiley!)

The first stop on our tour of Mayan ruins was the Pre-Classic civilization of Coba, which is located about 40 km off the coast. We explored the site with five other tourists and one very knowledgeable guide.

We visited the “stadium” where athletes moved a ball up sloped walls with their hips. We rode bikes along the dirt paths from one temple to another. We met Oscar the Coati. We climbed Nohoch Mul, the tallest pyramid in the Yucatan, which rises 12 stories above the jungle. We learned the Mayans cut down a lot of the jungle to expand their city, thus changing the environment and having to relocate when the rain stopped falling.

After we left Coba, we drove for almost an hour through the jungle on an incredibly bumpy, unpaved road to reach one of the 80,000 cenotes in Mexico. Cenotes played an important role in Mayan rituals, and we witnessed a reenactment of a fertility ceremony. We were each given four kernels of maiz (corn): two to toss into the water (where life originates), one to leave as a gift to the Gods, and one to keep. The Mayans believed the pools of water in the cenotes were pathways to the “afterlife.”

The term “cenote” refers to any location where groundwater is accessible. We climbed down a very steep ladder to get into the first cenote. We had to repel into the second cenote! There were seven of us on the trip, and only three of were brave enough to repel. Once we got inside the cenote, we swam in the cool, clear water. It was about 15 meters deep, and we saw lots of catfish … and bats! 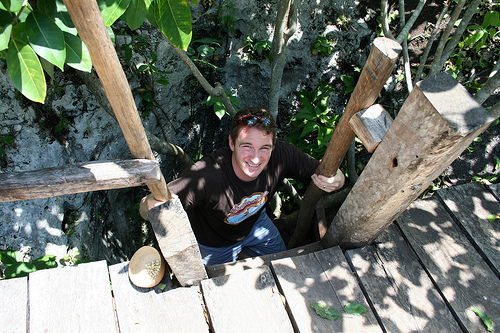 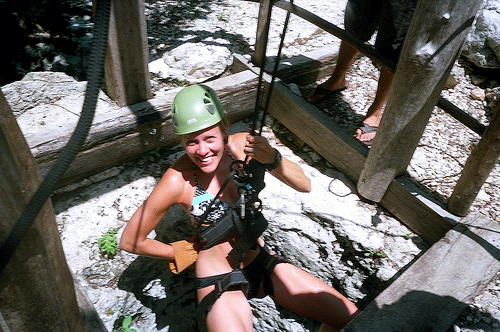 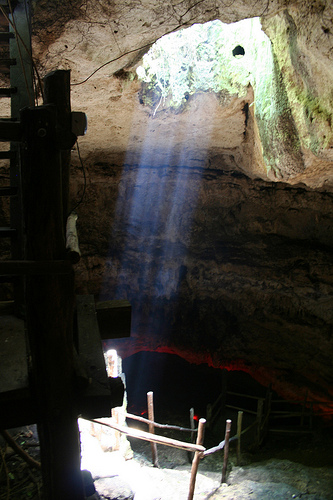 The final stop on our day trip was Tulum, a Post-Classic Mayan civilization. The Mayans moved to the coast to be closer to the water and built the city from recycled materials from Coba.

The sky was gray during our visit, but the water was beautiful shades of blue.

We were exhausted after our 12-hour excursion, so when we returned to the resort, we grabbed drinks from the bar – Banana Mama for me and Mudslide for Nick – and headed straight to our room. 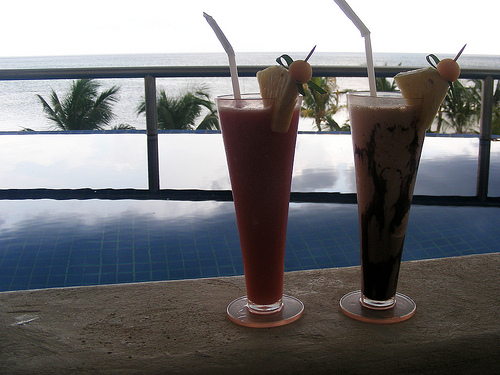 El Dorado Maroma offered a special five-course Italian dinner that night, and we obviously had to participate. The appetizer course was salmon marinated for 20 hours with green pepper, dill, rosemary, salt, and sugar. And it was succulent. While we enjoyed the delights of the talented chefs, we were entertained by an opera singer with the most lovely voice.

Nick’s Main Course (and his favorite dish of the week): Sole Fish Fillet with Eggplant Parmesan style
Dessert: A sweet Cookie with Mascarpone Cheese and a “Basil Slushy” 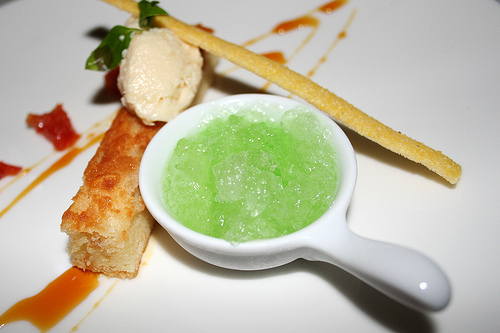 Next: Fish on the Beach and Souvenirs from Playa del Carmen