While Nick and I were smiling for the camera, our guests moved under the tent for the cocktail hour. They were supposed to gather around the rectangular pool — amidst round high top tables and mason jars of candles tied with red and orange ribbon — but the wet weather prevented that from happening. However, I heard they still had a pretty excellent time.

The space was decorated with red and orange Chinese lanterns of various sizes, strings of white lights, baskets of greens, and fichus trees (all expertly arranged by our day of coordinator, Betsy, I must add). 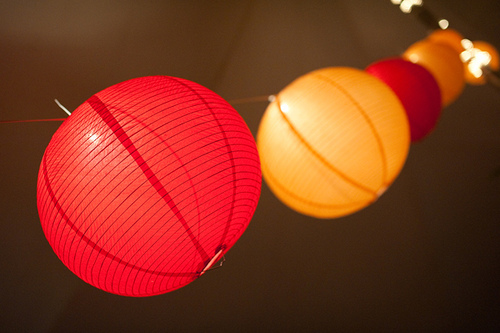 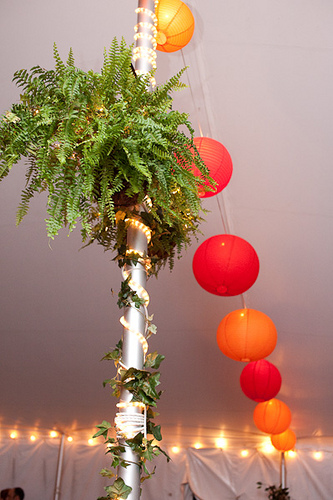 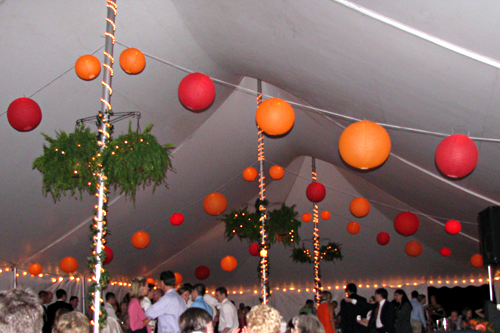 Susan Savia provided the entertainment, and drinks were served alongside a European cheese spread with fresh bread, fruits, dips, and mustards (provided by The Festive Board of York). 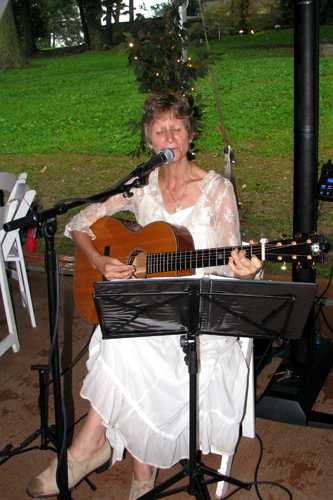 Guests found their escort cards clipped by clothespins between two wooden posts. There were also photos of the two of us through the years. (Unfortunately, I have no picture of the masterpiece we finished the day before the wedding!)

Each table was named after a place Nick and I visited together, with a photo of us at that place. A red square napkin was placed in the center of each table and held a quart-size mason jar with an arrangement of daisies and dahlias and smaller mason jars filled with river pebbles and candles. 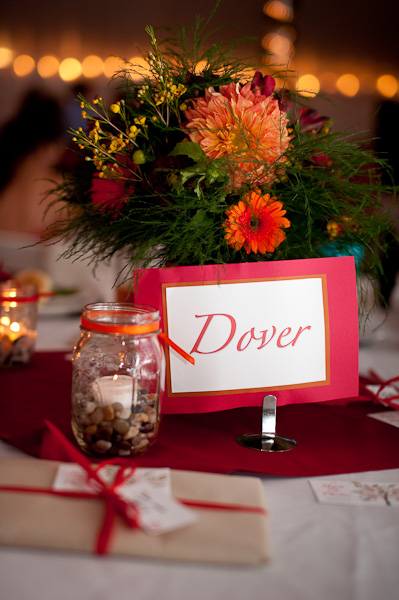 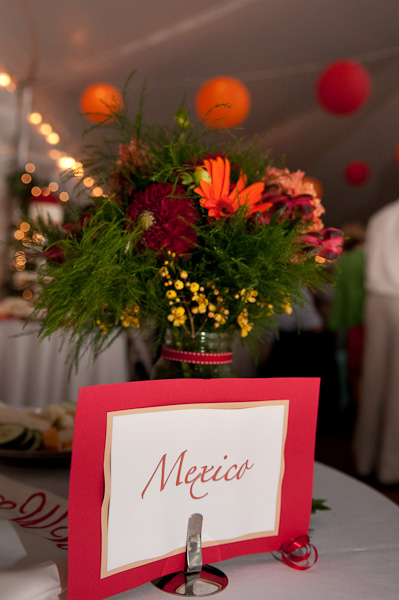 We gave our family and friends about an hour to mingle before we joined them to REALLY get the party started. Our DJ, “Wild Bill”, served as the MC for the evening, and he was fabulous. He’s articulate and eloquent, yet imaginative and humorous.

First he recognized our grandparents who were already seated at their tables, and then he announced our parents to the tune of “We Are Family.”

Parents of the Bride 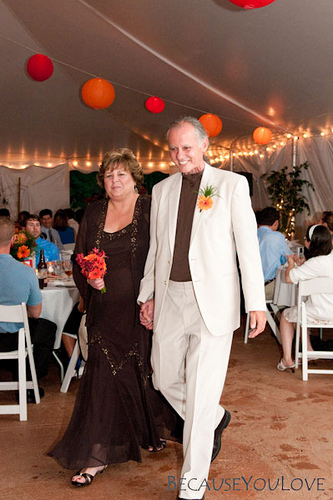 Parents of the Groom 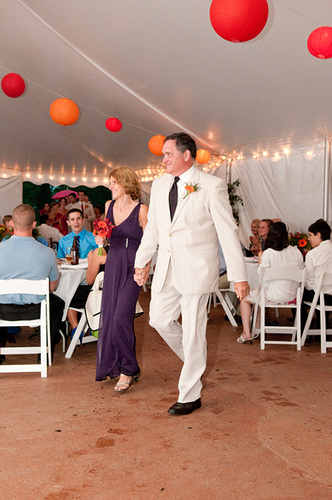 Next came the wedding party, and they showed off some funky moves to “Play That Funky Music.”

Leave it to Greg to nearly butt-bump Mary into the DJ’s table. 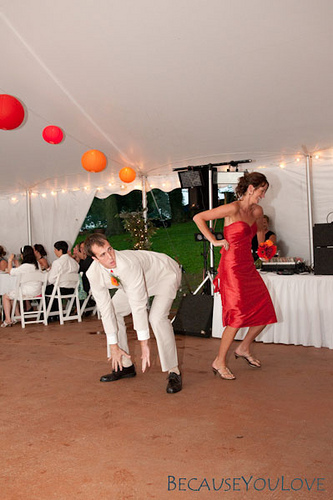 Our married friends (not to each other), Brian and Quinn, were a bit more graceful. 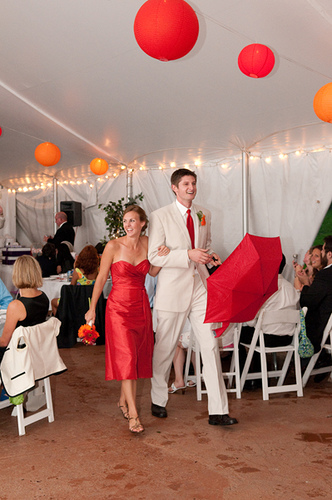 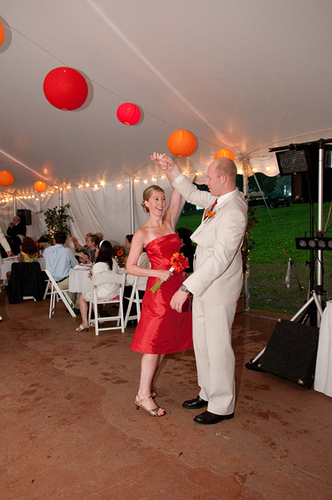 Andrew (brother of the bride) and Kristen (yes, we had two Andrews and two Kristens) showed off some smooth moves. 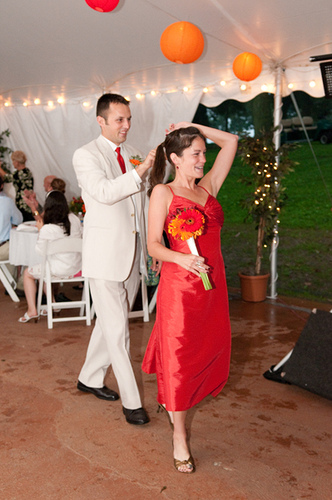 Siblings of the groom, Jon and Kirsten, got down. 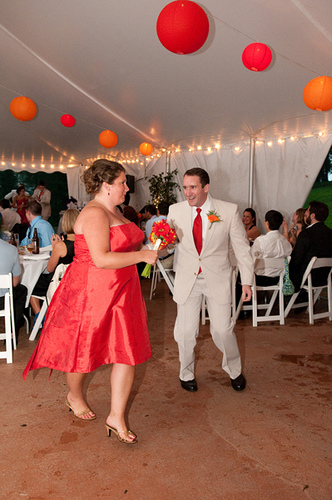 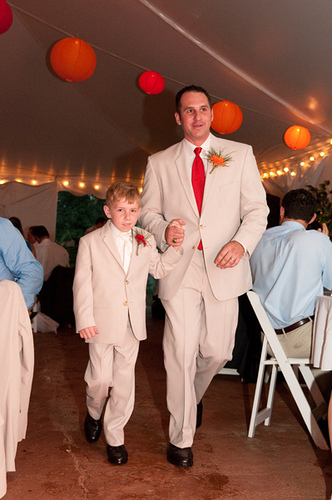 Maid of Honor/sister of the bride, Laura, and Best Man/best friend of the groom, Mike, looked chic and dapper. 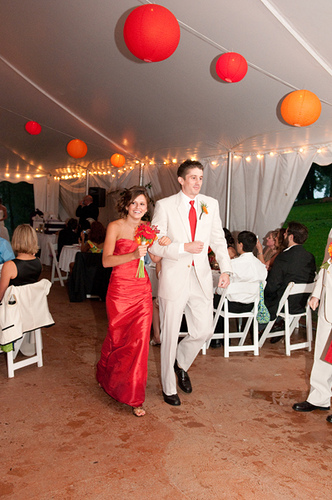 And then onto the main event: the new Mr. and Mrs. Wiley! Wild Bill said, “It may be raining outside, but the love in this couple’s life is shining bright.” Corny? Slightly. But very appropriate and very true.

Nick and I were announced to “The Way You Make Me Feel,” by none other than Michael Jackson. And, of course, Nick did the moonwalk! 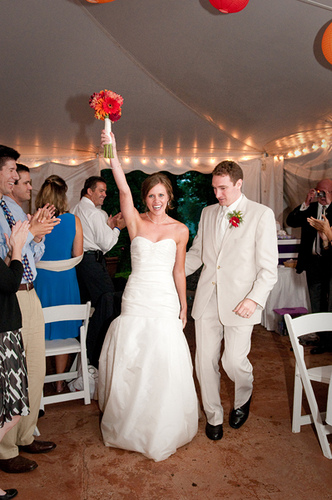 Next: You Are The Best Thing

2 thoughts on “Let's Get This Party Started”