Grandma Wiley passed away last week. She died peacefully in her bed, surrounded by family. It’s exactly how she wanted to go.

Fortunately, I had the opportunity to meet Grandma last summer while she was still sharp. She knew I was Nick’s better half and a Penn State fan (she loved the Nittany Lions and the Steelers!). We visited her in Altoona — where she lived most of her life — and she insisted we eat strawberry shortcake.

The Wiley clan is a big one — 26 grandchildren (not including spouses) and even more great-grandchildren. And the amazing thing is that every single grandchild returned to Pennsylvania for the funeral. Family traveled from Delaware, North Carolina, Texas, Alabama, and California, among other states.

Nick and I drove to Landisville on Sunday to see his siblings who drove/flew from Virginia, Georgia, and Alabama. We hadn’t all been together since Thanksgiving 2007, and this was our first time meeting nephew Jackson (who turns ONE today!). We couldn’t have had more fun watching him cruise around the house in his bare feet and listening to seven-year-old Sean tell us stories about school and his football team. Sean is quite the talker! At one point, he stopped to catch his breath, and said to me “I just have so much to tell you!” Another favorite moment was when Nick bounced and sang Jackson to sleep. His chubby little hands gripped Nick’s sweater, and they both looked so sweet.

We met up with everyone again in Altoona on Monday afternoon. Almost everyone booked rooms in the Hampton Inn, and we literally could not turn a corner without bumping into a Wiley. Everyone was SO welcoming. Cousins knew who I was without an introduction and greeted me with hugs. And I worked really hard to memorize names, most of which I recognized from our wedding guest list.

It was a huge and happy family reunion — nearly 90 of us! There couldn’t have been a more positive ambiance in the funeral home. And Grandma looked so peaceful. We later found out that she had labeled her favorite pink dress with a note that said “Bury me in this.” The woman knew what she wanted!

After the viewing we gathered at an uncle’s home for a smorgasbord of yummy food. There were kids playing ping pong in the basement and babies being passed around and adults catching up over glasses of wine. Nick and I made our rounds and told stories of our engagement and plans for the Big Day.

We returned to the funeral home on Tuesday morning to pray the Rosary (Grandma’s wish), traveled in a procession to the church for mass, spent a few final moments at the grave site, then went to an Italian restaurant for a lunch buffet.

All in all, it was a really celebratory and enjoyable time. And if it’s possible, I’m now even more excited for the day I officially become a Wiley!! 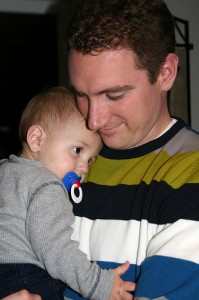 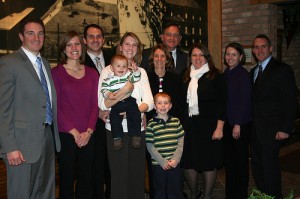 (more photos from the Wiley reunion)

2 thoughts on “A Life Worth Celebrating”