I experienced my first Bar Mitzvah, and what a cultural experience it was! The celebration was in honor of Jordan, a family friend of Nick’s. They were neighbors in Virginia, and Kirsten babysat him when he was young. Wait, he’s still young! Just thirteen. Which is why I was so surprised by the extravagance of the Jewish tradition.

The day began with a three-hour Shabbat (a.k.a. ceremony) in the synagogue, and Nick wore a yamika. Did I mention that about 95 percent of the ceremony was in Hebrew? But it really was enchanting. The congregation sang and bowed and kissed the Torah during it’s procession from the curtained shelf to the center of the room. Jordan then read from the Torah while the Rabbi and his family stood nearby. He also described (in English) his plans to contribute as a mature member to the Jewish community.

Afterwards, as we were making our way to Jordan to share our congratulations, Nick noticed a large group bolting for the back room. As the door swung open, we caught a glimpse of a table full of liquor. And Jews raising plastic shot glasses in a “toast to life.” Another surprise!

After a kosher lunch (also a first), we left for a break before the reception. Despite the disappointing Penn State loss vs. Iowa, we returned to the synagogue to party. We ate mini hot dogs and stuffed mushrooms (kosher, of course) and drank Coronas before the formal dinner began.

Jordan was welcomed into the reception room ala the announcement of a just married couple. He pumped his fists to something like “Let’s Get Ready to Rumble.” It was quite entertaining. And then the party began. There was a slideshow, food, the breaking of the challah, and dancing. We lifted Jordan in his chair and clapped along during the Hora dance. So very festive!

At times I felt like a foreigner, but it was great to witness the traditions of another culture. Mazel tov, Jordan! 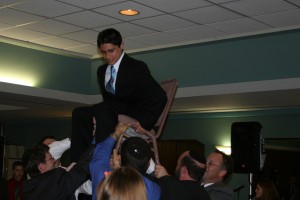