eat drink and be merry

The fourth and final member of the crew arrived late Friday night. We welcomed her to the Emerald City with scallops and salmon and Pyramid Hefeweizen. We opted out of anymore alcohol and chose, instead, to lounge in our PJs on the king-size bed for slumber party talk. Not even a city as lovely as Seattle can diminish our girliness.

Starbucks, of course, are found on every corner in Seattle. And, although it was incredibly touristy of us, we ordered our morning lattes from the flagship store located across the street from Pike Place. Paired with one half of the Daily Dozen Doughnuts each, we strolled through the market, admiring the local lilies (fuscia, gold, violet) and Native American turquoise jewelry and hand-blown glass. I then introduced the girls to my favorite Seattle Works barista before heading for Pioneer Square: the city’s first established neighborhood. The architecture was gorgeous and made me nostalgic for London. The towering totems in the cobblestone square showcase the history of the city, and we found art galleries and boutiques to wander through. 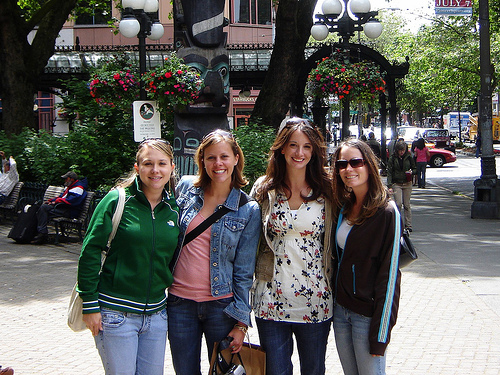 Sticking to our “eat drink and be merry” motto, we figured it was time for an afternoon snack … Crab dip, oysters, and our new favorite Hefs on the deck of Elliott’s Oyster House overlooking the Puget Sound. A rejuvenating hotel nap was required after the fried and brewed goodies. I groaned when it was time to leave the pillow-top mattress, but quickly found energy and inspiration atop the Space Needle. 41 seconds to 520 feet above the city. Too bad Mount Rainier wasn’t visible through the clouds. The skier of the group was understandably bummed. 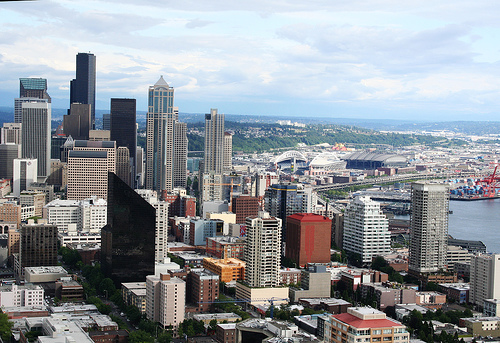 Next stop on the itinerary was recommended by a conference colleague. He said, “Capitol Hill is the place to be,” so I, of course, envisioned it to be the Soho of Seattle. We figured we’d taxi to the neighborhood for dinner and drinks. After the cabby chatted about womens’ shoes and manual transmission for 10 minutes, he dropped us off on Broadway. Disoriented, we walked up and down the same street three times before heading north. Just past the community college campus, we learned that today, of all days, was “queerfest.” None of the four of us are homophobic by any means, but that doesn’t mean the topless women on bicycles parading down the street with rainbow flags didn’t make us slightly uncomfortable. We slipped inside the first restaurant we found: La Cocina. And I must say, they served tasty Mexican cuisine with a Pacific Northwest twist. I enjoyed seafood quesadillas with shrimp and crab. The (extra-large) margaritas were flavorful, as well. After dinner, we opted to return to the comfortable (though some may say dull) confines of the Waterfront for the remainder of the evening. We felt more relaxed surrounded by yuppies in khakis and polos. What can I say … You can take the girls out of Pennsylvania, but you can’t take Pennsylvania out of the girls.

One thought on “Seattle Stories: Part 3”