We kicked off Christmas season with a walk down to the Green to welcome Santa Claus to Morristown. We sang Christmas carols with hundreds of other community members as we waited for the big guy’s sleigh to land on top of the Century 21 department store building. The kids were mesmerized as we watched Santa ride the fire truck ladder from the top of the building to the ground.

Bobby the Elf arrived on December 1st and brought chocolate chip muffins for breakfast. Every morning after that the kids raced downstairs to look for Bobby and open another door on their advent calendar. 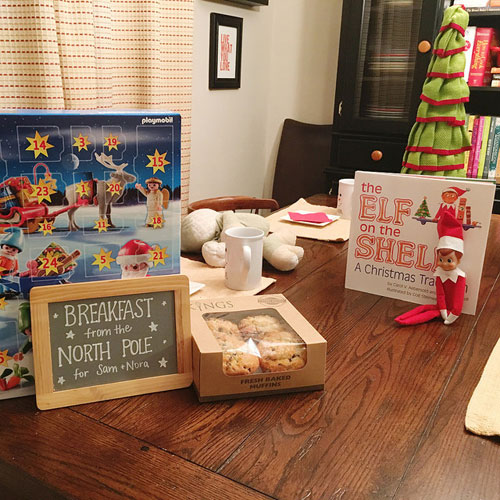 While Nick jet-setted off to Germany for work obligations, I took the kiddos to Dover to bake cookies! Dad and Laura and I have mastered our family’s sugar cookies, and Sam did a pretty decent job as decorator and taste-tester.

Back to New Jersey to celebrate St. Nicholas Day. Our own St Nick brought back some authentic goodies for Germany, including Rittersport and Kinder Eggs. The kids also got robes and slippers (Spider Man and Minnie Mouse) and new Christmas books to add to our growing collection (George and Ollie). 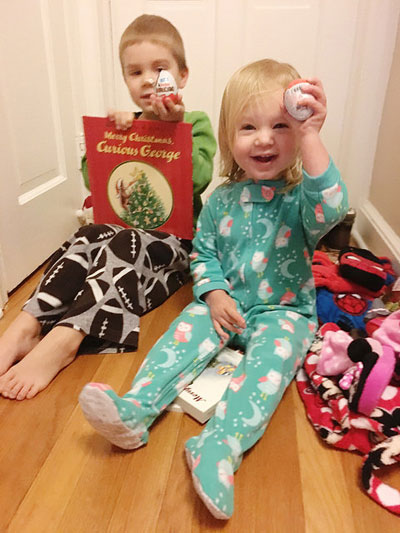 Before Daddy left the country again — for Canada this time — we sprinkled some Christmas joy around our home. We opened the box of our very first artificial tree (because our limited time at home this month just didn’t justify a real tree) only to find that the 7-foot white-lit slim pine that we had purchased had been replaced by a barely 5-foot multi-color tree with frayed branches and a few old ornament hooks. Yes, that’s right. Someone bought a new tree and returned their old one. And they got away with it. Sam was especially bummed and couldn’t understand why we had to pack it up for Mommy to return to Target the next day. Fortunately, they still had a slim pine in stock, and we set it up as soon as I got home. 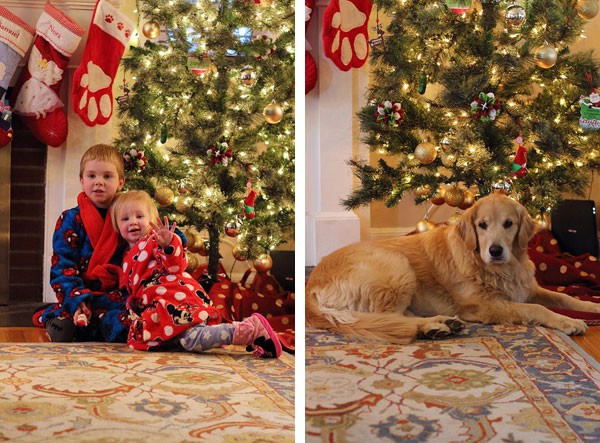 Auntie Laura spent a few days with us while Nick was traveling. We watched movies and ate popcorn, worked on Christmas tree crafts, and did a little shopping. While at the mall, Nora caught her first annual glimpse of Mr. Claus. She was perfectly content to wave at him from a safe distance. 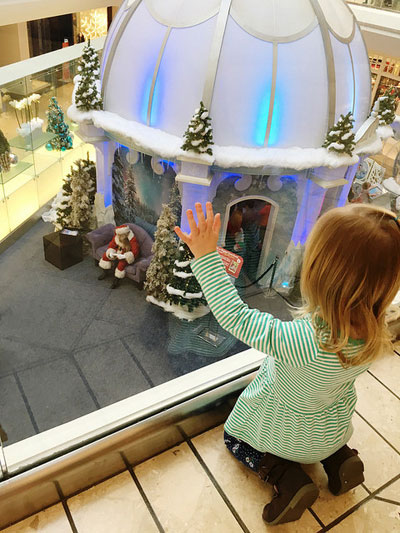 Two weeks before Christmas, on a 60+ degree day, we thought it would be fun to take the train into New York City. Not only was the city packed with holiday shoppers, there were also 20,000+ drunk Santas stumbling around. It was not at all the fun, festive family outing that we had envisioned. At one point, we had to recruit help from a muscular man to hoist the double stroller over a 4-foot barrier because we were stuck for 45 minutes in a mob of people outside of the Disney store. But don’t get me wrong. There were moments like this: seeing the pure joy on Nora’s face when she spotted the tree at Rockefeller; watching the ice skaters at Bryant Park with Sam; dancing with the Salvation Army donation team; devouring slices of pizza on the steps of Madison Square Garden while waiting for our train back to NJ. Those moments made our crazy adventure idea seem a little less crazy. 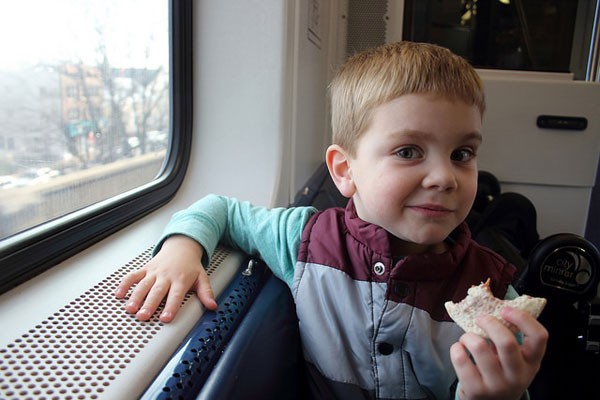 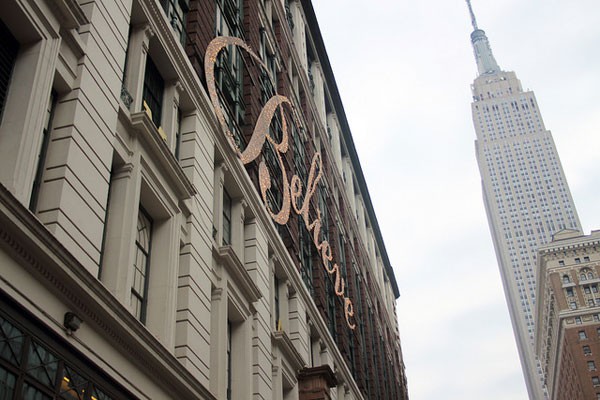 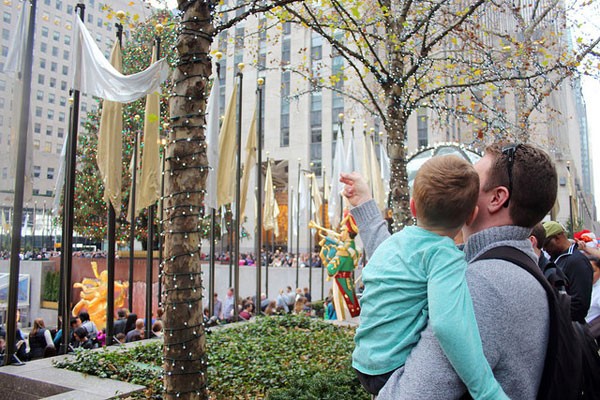 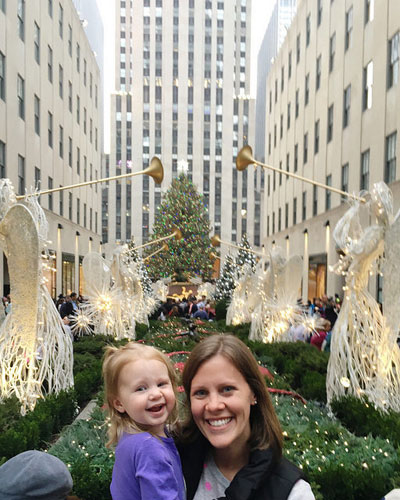 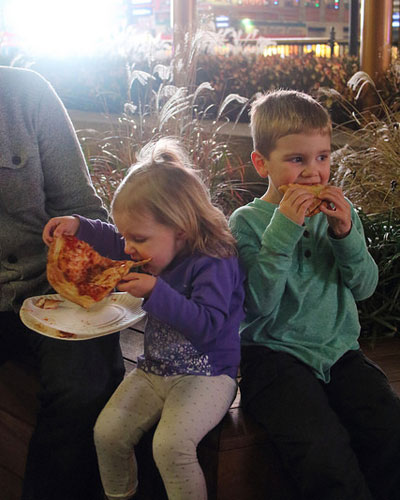 On the Monday before we headed south, I dressed up the kids in their holiday attire, and we were off to see Santa. Sam prepared his list, which included Star Wars guys, a robot, and walkie-talkies. And Nora seemed surprisingly excited about the idea of sitting on Santa’s lap, “with buh-buh, too” she added every time that I asked. When we arrived, both kids were successfully distracted from the long line by Charlie Brown and Snoopy and fake snow falling from a larger-than-life-size snow globe. Of course, they threw handfuls of the fake snow at each other, and I frantically tried to brush it from their hair and clothing before our names were called. And then it was our turn. Sam ran right up to the jolly old man, and Nora clutched my leg as tightly as her little arms could manage. But Santa was amazing. He got onto his knee, looked into Nora’s eyes, and addressed her by name. Before I realized it, they were talking about baby dolls and Daniel Tiger. However, she still wouldn’t get any closer than the plastic white stool at his feet. But I’ll take it! 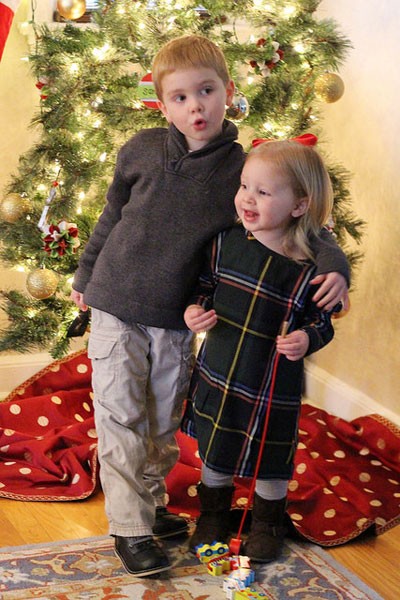 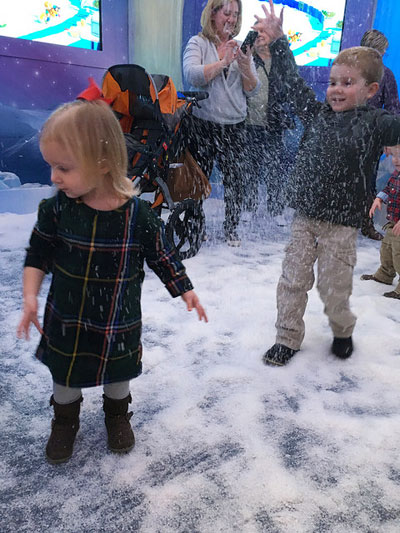 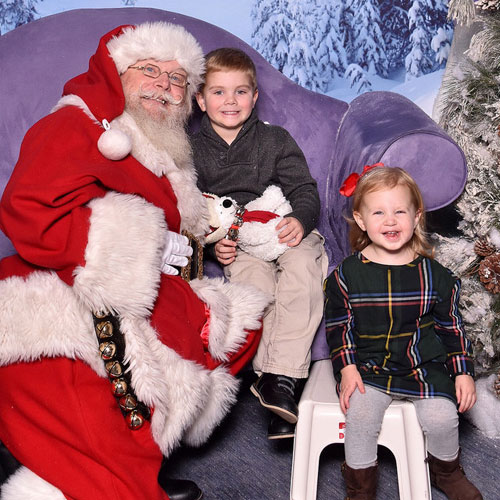 After Nora’s meeting with Santa, she was even more interested in all things Christmas. And her mind was totally blown when I showed her the special video message that he sent just for her. Every time he said her name (which was about five times during each viewing, and we watched the 3-minute video at least 35 times), her face lit up with the most amazing smile. Gosh, I love witnessing the magic of Christmas through our children’s eyes. 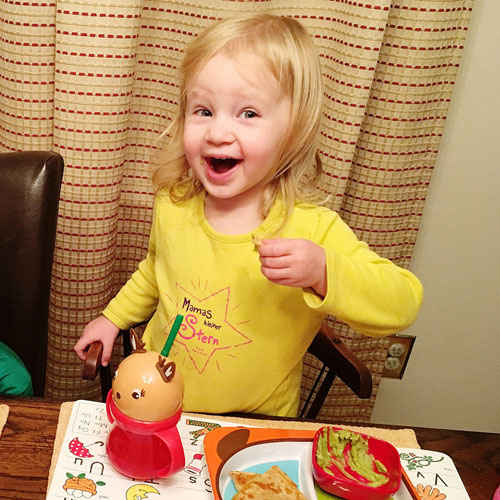 Finally, we closed out the week with a little Christmas concert and party at Sam’s preschool. The kids performed several songs, including “chopping down the Christmas tree,” which Sam had practiced for Nick via FaceTime the night before. They then binged on cookies and cupcakes and apple juice before hugging each other good-bye until the new year. 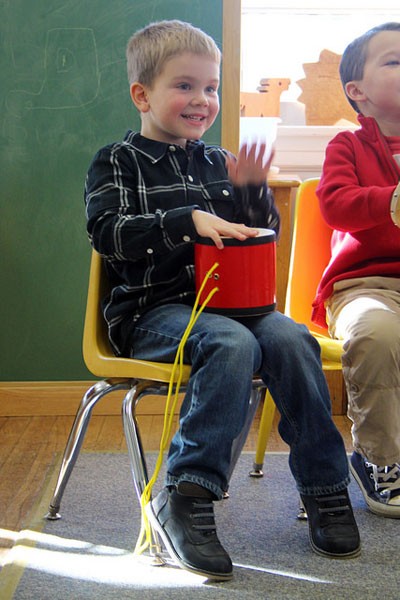