Finally! A weekend in State College. No invitations to assemble or cake flavors to choose or vendors to meet. Of course, we had to have a bit of wedding planning fun: We worked on our ceremony, chose our attendants’ gifts, and started our dance lessons!

But there was also ample time to relax. And to us, relaxing means drinking Otto’s beer and watching numerous episodes of The West Wing.

We also treated ourselves to a yummy Italian dinner on Saturday night. We headed to Alto in Lemont, just 15 minutes from my apartment. Built in 1892, the Victorian house is now home to contemporary Italian fare. The traditional space has been transformed by open architecture, clean lines, and old world Tuscany charm. 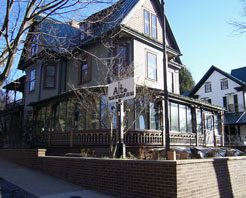 There were no tables available for our 8:30 reservation, so we headed downstairs to the bar. We ordered local beers and enjoyed live jazz while sitting side-by-side on a black leather couch.

Shortly after, the hostess led us back upstairs to a private cozy table on the enclosed wraparound porch. We started with calamari, which had an exceptional amount of tentacles — Nick’s favorite. I usually prefer a squeeze of lemon and marinara dipping sauce, but the lemon garlic aioli was quite tasty. 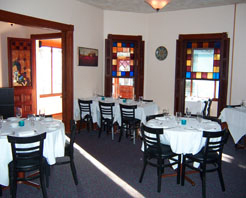 For our main courses, we took the recommendations of our waiter. Nick ordered the pappardelle with bolgnese sauce (the “man dish,” according to our waiter), and I chose the mushroom ravioli in pesto sauce. Everything was fresh and flavorful, right down to the chiffonade basil. (And the serving pieces were lovely, too!)

Believe it or not, we stopped ourselves from cleaning our plates … in anticipation of dessert, of course. And, boy, was that a good idea! The house made peanut butter gelato with chocolate swirl was TO. DIE. FOR. It tasted like cold decadent fudge. (I’ve craved it several times since Saturday.)

We were also asked to play a little joke on our waiter. It was his last night serving before becoming manager, and apparently he strongly dislikes preparing hot teas for patrons, so we ordered two hot teas and two to go. He nearly fell over, and then glanced in the direction of the kitchen to see his colleagues laughing hysterically. We pulled it off pretty well (despite Nick’s snickering) and were congratulated numerous times. Oh, we also got our drinks and dessert for free!

It was such an enjoyable evening, and I think we’ll be returning again in the near future — if only for the gelato. 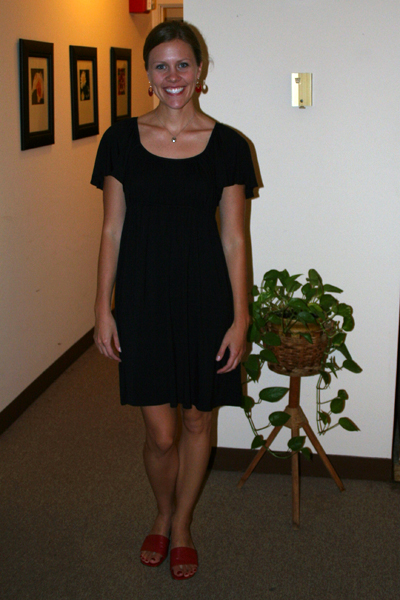 {And here I am post-dinner in a classic and comfortable dress bought with a gift card to Ann Taylor from my future inlaws — thank you!}

One thought on “An Italian Gem in Our Own Backyard”