The only year that we spent Christmas at home was the year that I was 38 weeks pregnant with Nora. Every other year, for eight years, we have traveled to spend the holiday with both of our families: from Pennsylvania and California to Alabama and Virginia. But it’s always worth all of the prepping and packing and the hours spent in the car or on an airplane.

This year we started at Laura’s and Stephen’s house in York, PA. It was the perfect spot to stop for the night on our way from NJ to VA. They treated us to dinner and a fire in their beautiful new fireplace. And Sam was thrilled to finally have a sleepover in his “room,” a.k.a. the gigantic closet that he claimed as his own on the first day that he visited their house last year. 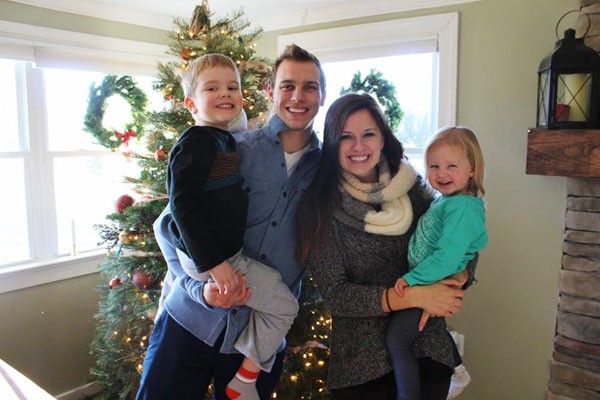 We left early the next morning and stopped to visit friends and eat pizza in Alexandria, VA. Bonus that the kids were sufficiently worn out by the time we got back in the car. Which means Starbucks and Serial podcasts for Mommy and Daddy. 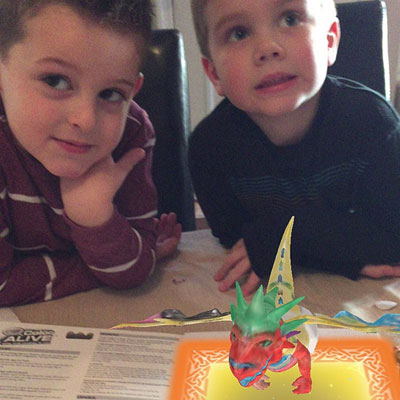 Final stop: Williamsburg, VA! We rolled in just in time for dinner. Though Sam immediately disappeared up to the playroom with his cousins, which is where he remained for almost the entire week.

Christmas week was filled with so many fun activities: gingerbread houses with the cousins, Polar Express and a hot cocoa bar with Oma and Opa, a glow stick party hosted by Aunt Kirsten, and so much delicious food prepared by Megan. The older boys went to the Star Wars premier one afternoon, and we took the kids to the playground on the only sunny day of the week. Nick stayed up late playing video games with Sean, and I got to sleep in several times, thanks to aunties and grandparents. Many days we stayed in sweatpants and ate a ridiculous amount of sweets. And Nick and I escaped one afternoon for a quick, rainy stroll through Colonial Williamsburg. 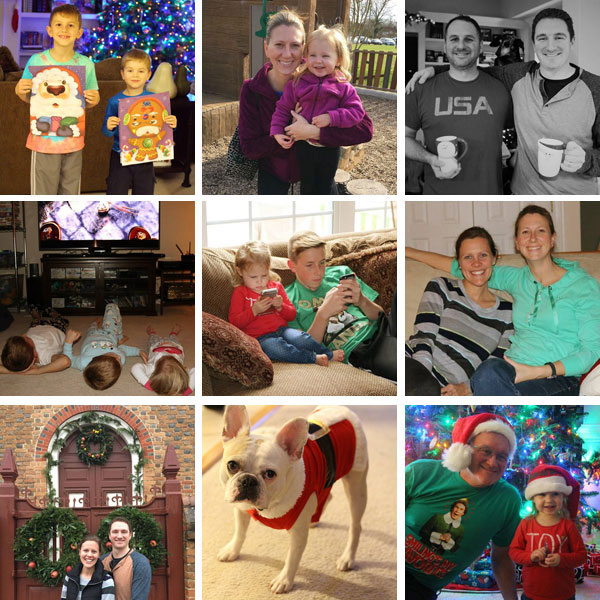 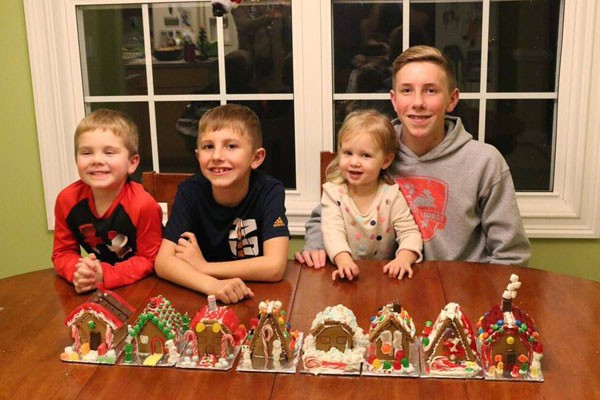 On a very humid and rainy Christmas Eve, we headed to Busch Gardens for Christmas Town. We saw several impressive shows, including Scrooge and Gloria. We walked from country to country and marveled at their light displays (Germany’s Festhaus and tannenbaums was a definite favorite). We even got to catch up with NJ friends, although the kiddos did not cooperate for a photo to commemorate the occasion. Then we enjoyed dinner with Santa and Mrs. Claus and their elves. Sam and Nora and their cousins visited with Santa and shared their final Christmas list wishes. And everyone enjoyed the chocolate chip cookies baked by Mrs. Claus. 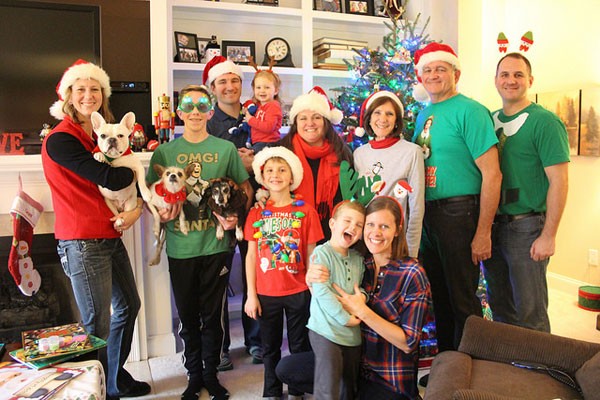 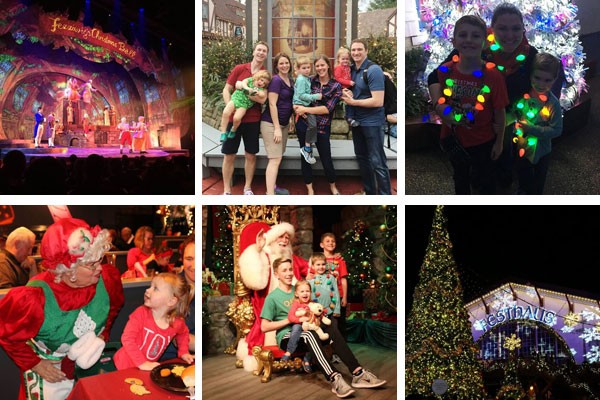 We got to bed late on Christmas Eve. But that didn’t stop the kiddos from waking up bright and early to find out whether Santa had visited. 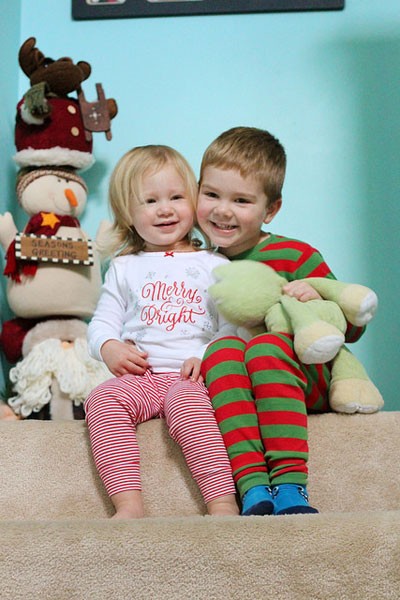 And he did! We tried to control the chaos of four kids and three dogs and piles upon piles of presents. But the chaos is what makes Christmas so wonderful. Favorite finds under the tree included a baby doll that Nora promptly named Baby Margaret, the Millennium Falcon, several Pete the Cat books, and a set of walkie-talkies that Nick was as excited about as Sam. And Momma got a new camera! 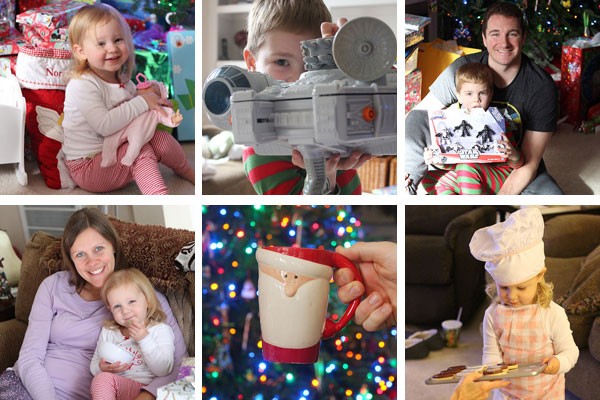 We concluded our week in Williamsburg with a festive feast and more sweets before heading north to PA to do it all over again.

Sam helped Nini to prepare our traditional Christmas breakfast of egg and sausage casserole and apple nut ring with mimosas. Then it was on to more gifts. Sam was immediately obsessed with his new microscope and science set (he even declared, “I love science!), and Nora spent the remainder of the day feeding and diapering her baby doll. And the adults were pretty excited about our beautiful canvas bags filled with camping supplies. The five (!!) dogs made our celebration even crazier than usual. But we wouldn’t have wished to have it any other way. We were especially grateful that Andrew and Breck drove all the way from Colorado to spend the holidays with us! 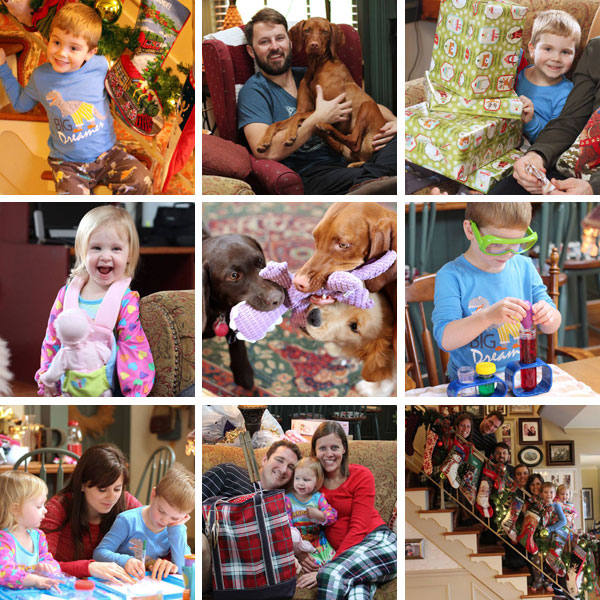 The rest of the week was spent entertaining the kids with their new games and gifts and puzzles like Spirograph, Ants in the Pants, and LEGOs. We went bowling one rainy afternoon, and the boys played several rounds of frisbee golf at a local park. We stayed up late playing cards almost every night. And the dogs were permanently caked in mud from wrestling outside. Mom and I prepared an amazing feast of filet of beef with Gorgonzola sauce, smashed Parmesan potatoes, and green beans — and we all declared it restaurant quality. And Sam expertly wrapped bacon around pheasant, courtesy of Stephen and Andrew and their hunting dogs. 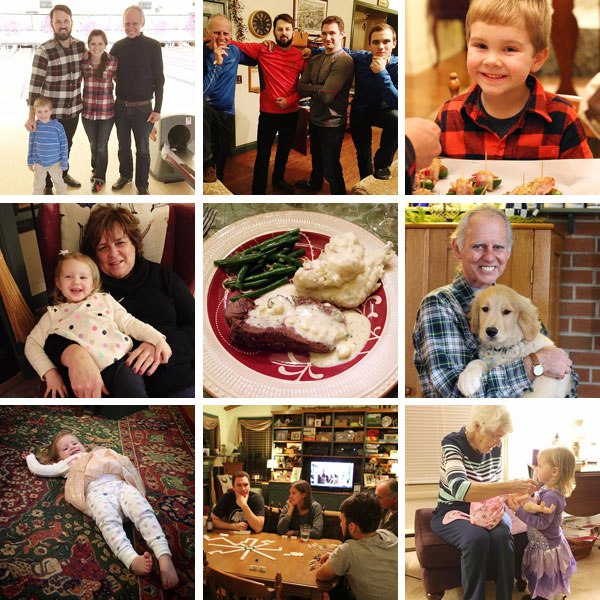 We rang in the New Year with lasagna and Mexican Dominoes and all managed to stay up past midnight. 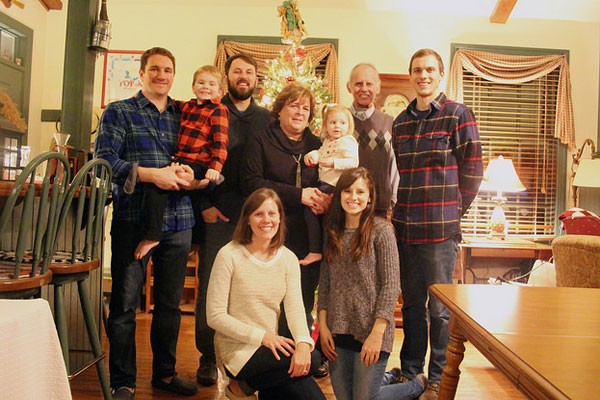 The fact that we got to spend so much time with both families, and that the kids really enjoyed and appreciated the generosity of everyone made this one of my favorite holidays yet.