Sam is imaginative and inquisitive, and sometimes I can’t believe the things that come out of his mouth. 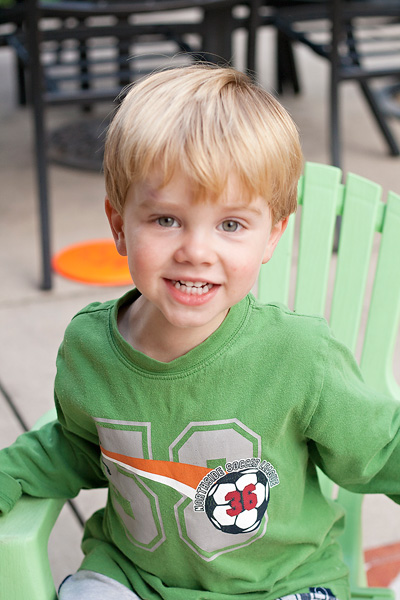 I encourage him to ask new friends: “What is your name?” But he prefers: “What your name is?” He also says: “Where you are?” and “Where it is?”

I hear “why?” at least a dozen times every day. And he continues to ask until he’s satisfied with the answer. “Because I said so” is not acceptable.

For awhile he told everyone he was “half two.” But now it’s just “six.”

He is an awesome big helper. He’s always asking: “I help you, please?” And saying: “We need to work.”

One day I told him I need a vacation. And he replied: “Don’t leave, momma. I’ll miss you.” And I melt every time he calls me his best friend, which has been a lot lately.

During our first attempt at potty training, I told him we ran out of diapers and had no money to buy more. And he said: “But Daddy has a job. He has money.” And I said Daddy didn’t have enough money. Then he said: “You need to get a job, Mommy.”

One evening, we went to the playground after dinner, and while Nick held Nora, I chased Sam around the playground. He said: “Mommy, you’re fast! Wait, I need to stop to get my breath.” And took a big, deep breath. Then started running again.

He is beginning to understand the concept of time and says while driving in the car: “It’s taking a long hour to get home.” He also often refers to “today” “tomorrow” and “next week.”

For weeks, he was obsessed with planning his super birthday party and wanted to talk about it every night before bed. And every day he insisted on looking inside the “super party box” that sat on the dining room table.

A few birthday gifts arrived in the mail, and I asked him not to open them. But he did and then reassured me: “Don’t worry. It’s just diapers and wipes.”

He can be very matter-of-fact (like his father!), and if we try to turn something into a game (like dressing him in the morning), he will say: “You don’t need to do that.”

We were so excited on the morning of his first day of preschool. We may have done a little happy dance. And he told us: “Settle down, guys.”

One thought on “What Sam Says: Volume 2”