I have an ongoing notes file on my iPhone where I record all of the silly and surprising things that Sam says. The things that make me laugh and the things that leave me wondering, when did he turn into this little person with questions and opinions and an awesome sense of humor. 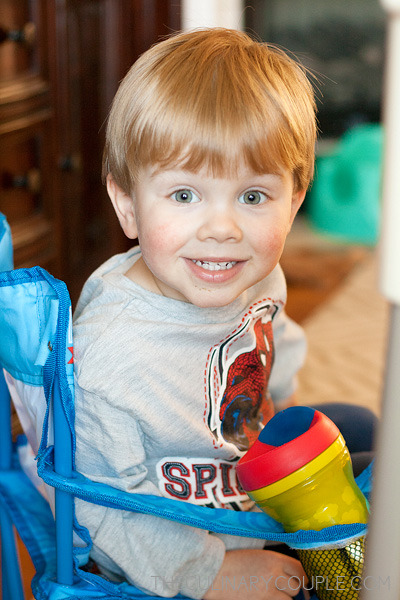 To his baby sister: “I yuv Baby Nor-wah with my whole heart.”

To his favorite stuffed animal: “I miss you Ricky. I so worried about you.”

To Mommy before our cousin’s wedding: “I yuv your dress. It’s so boo-full.”

To Daddy on the phone after finishing his dinner: “My belly get bigger and bigger like yours.”

He is so considerate and is always asking: “You OK in there?” Or: “You OK up there?”

I told him he would get a lollipop if he sat on the Easter Bunny’s lap. And he said: “No, I have my own yoyyi-pops.”

He heard Daddy using the saw in the garage, and he said: “Sounds like Bob the Builder.”

Paw Patrol is one of his new favorite shows, and he is constantly saying: “Ladder up.” And: “Sammy on the case.”

He loves to fix his cozy coupe car, and one morning he said: “I need to fix the cracks. Hmmm. I have an idea. I get tape!”

He came running into my room shouting: “We have an emergency!” When I asked what was wrong, he said: “I lost my drill. Don’t worry, Mommy. I find it.”

After a full day of play, he says: “I tired. I work all morning.”

When Daddy tickles him or Mommy gives him too many kisses, he yells “enough!” between giggles. And he often holds up his finger and says “one second.” (I think he gets that one from me.)

Three favorite phrases that he uses a lot: “I do it more again.” And: “That’s a big problem.” And: “That not supposed to happen.”

After a particularly long day, I said to him: “The clock says bed time.” To which he replied: “No, the clock says movie time.”