6:30am | Nick’s alarm goes off. I groan and roll away from the buzzing as he begrudgingly gets out of bed. But … TGIF!

6:45am | I hear the girls’ bedroom door open and little footsteps head into the bathroom where Daddy is showering, followed by quiet conversation, and then, “Sam, do you want to play boxing?” I’m sure that Sam wasn’t awake, but he definitely is now.

6:50am | Nora is at my bedside, asking if she and Sam can “play boxing,” which Nick allowed them to do last night while I washed the kitchen floors. “Not now,” I say, which Nora interprets as, “Mommy says we can play in the meantime, Sam.” Which, I guess is a word that I sometimes use?

6:55am | Nick is back upstairs to get dressed, and I’m still in bed. I ask if we can flip the mattress tonight, and Nick says he can’t wait to get a new king size Casper mattress one day, which he has been talking about for at least three years already.

7:00am | I’m finally up and am greeted by Bat Girl in a pink cape, while Sam is on the hunt for his Spider Man mask. I find Evie in her crib, playing with a baby doll, which Nora must have slipped in this morning. I change her stinky diaper and can’t stop laughing when Chewbaca appears in the doorway. 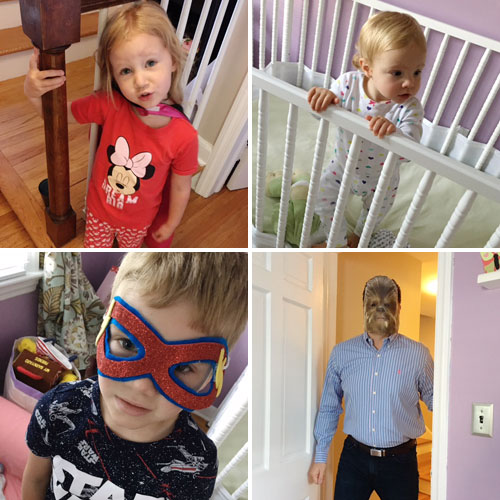 7:12am | Everybody is downstairs, and Nick starts the coffee. Recently, he’s been leaving the house at 6:45am, so it’s nice to have him here to help with a few morning tasks. I grab a banana for Evie and set her up in her new seat at the dining room table. Last night, I decided to take the tray off her booster seat, in hopes that this would prevent her from throwing half of her meal onto the floor and then climbing into my lap to steal bites from my plate. The verdict is still out.

7:25am | Time to say goodbye to Daddy. Big hugs and kisses all around. 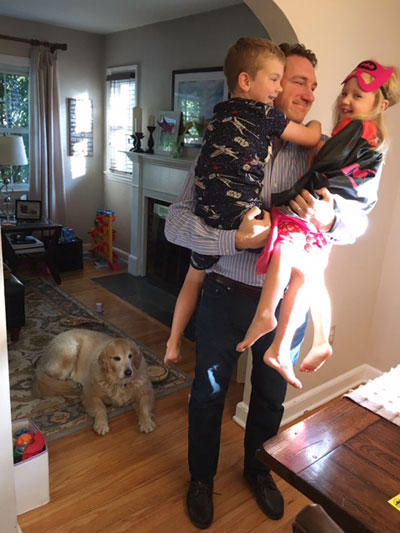 7:30am | The big kids agree on bulls-eyes for breakfast (a.k.a. eggs in a basket or toads in a hole), and Sam helps to cut the holes. It’s nice to know that our shot glass is still being used for something these days.

7:40am | Nora eats her eggs, Evie shares bites of mine, and Sam eats three of his own, plus a glass of orange juice.

8:05am | The bag of boxing gloves appears on the living room floor, and the big kids are suiting up for their match, while I exchange texts with friends about our trip to the zoo later today. Fortunately, there are no tears or band-aids required during the boxing match.

8:15am | Sam is gathering supplies for his first art project of the day. He draws two stick figures, one with red gloves and one with blue gloves, and asks me to draw a boxing ring. Then he cuts out all of the pieces and glues them onto another piece of paper. Meanwhile, Nora morphs into Batman and Evie pushes cars around the kitchen floor, while I fill Lucy’s food bowl, gather up the breakfast plates, and attempt to unload the dishwasher.

8:55am | “I’m bored. What can I do?” asks Nora. Because one child is always “bored” before 10am, despite my very best efforts to fill our summer days with projects and playdates and chores and adventures. Fortunately, Evie finds a few UNO cards under the couch, and Sam and Nora decide to play a game, while I read some books to the littlest on the floor.

9:10am | The kids finish their UNO game and move on to Go Fish, which leads to requests for Goldfish. It’s never too early for snack requests in this house. 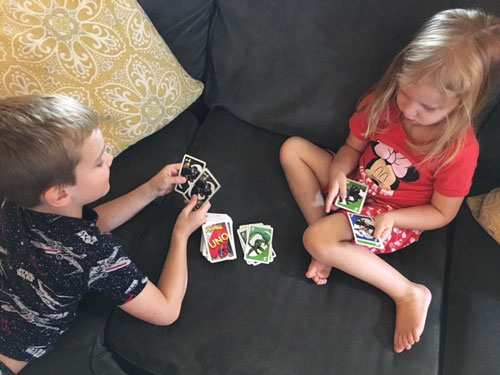 9:15am | I take Evie upstairs to change her diaper and get her dressed. But she escapes with her binky and baby doll. We end up in my bedroom, so I make the bed and pick up a few random things that have accumulated on the floor: my camera charger, a nerf gun dart, Evie’s bathing suit top, Peppa the Pig. 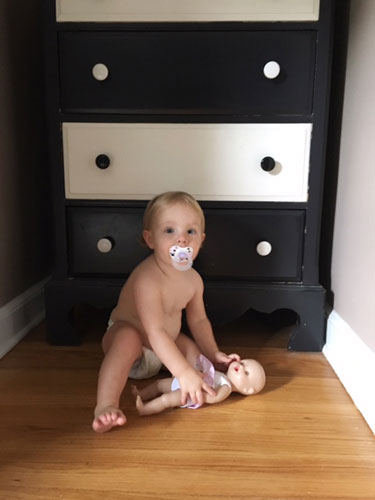 9:25am | The big kids are arguing downstairs, so I suggest they come up to get dressed. It takes at least 15 minutes to get all three out of pajamas and into clothes. Sam is whining a lot, and I hope that he’s not getting sick. Two nights ago, he was vomiting through the night, but he seemed fine yesterday. Fingers crossed he’s just tired.

9:55am | Evie is ready to nap, and the other two need a new activity. After brushing hair and brushing teeth, I set them up with water paint at the dining room table while I get dressed for the day. Since I showered last night, it’s an easy routine of face wash, lotion, toothpaste, dry shampoo, and mascara. Done. 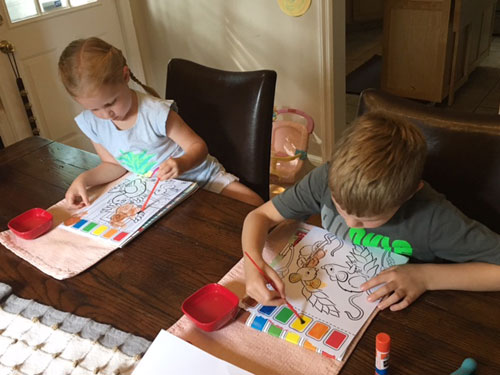 10:15am | Back downstairs to see the kids’ masterpieces. They ask to watch an episode of Paw Patrol. I oblige and use the time to sort through our CSA box, wash beakers and test tubes from this week’s science experiments, and jot down a few notes for my DitL post. I place an Amazon order: Pampers wipes, diaper bag refills, and a second stroller caddy, which I’ve been meaning to get for months because I always forget to move the one that we have from the BOB to the double stroller. I make a second cup of coffee and set out two rounds of pizza dough to thaw and, before I know it, it’s 11:30am. 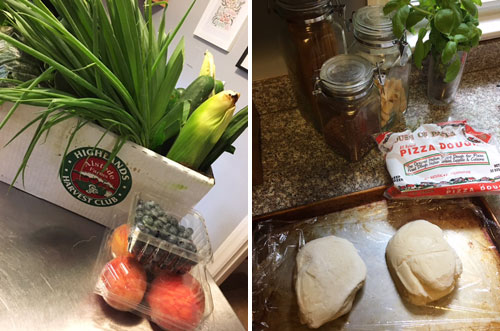 11:30am | I’m surprised it took this long for the kids to ask for their second snack of the day: applesauce and string cheese. While they eat, they build towers out of magnetic blocks. I hear Sam say that he’s going to capture the bad guys in his fortress. And soon a slew of characters has joined them in the living room: R2D2, a few Storm Troopers, Prince Wednesday, and Chase from Paw Patrol, to name a few. 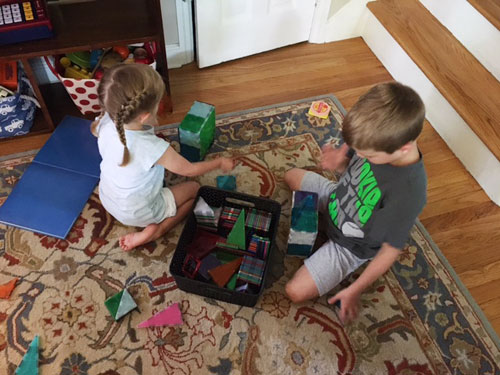 12:00pm | I get lunch ready: macaroni and cheese with peas and sides of peaches from our CSA box. Just before I set the plates on the table, I hear Evie babbling upstairs. After a quick diaper change, she’s sitting at the table beside me, trying to tear off her bib, as usual.

12:30pm | Nick calls to say that he’s stopping home before his dentist appointment, but I decide not to tell the kids so they can be surprised to see him in the middle of the day.

12:45pm | Sure enough, they’re surprised! Sam and Nora jump onto the couch and climb up to the window, and Evie is excitedly repeating “Dada Dada Dada” as he walks in the door. Though he can barely get past Lucy to see the rest of us. 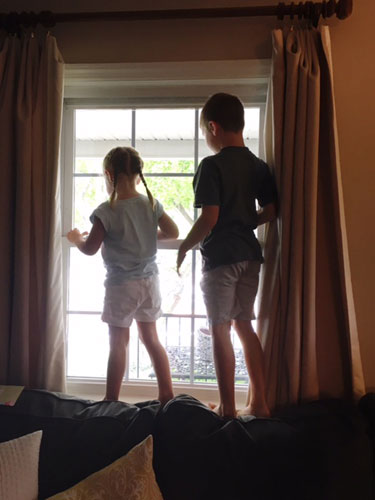 1:05pm | Diaper bag, water bottles, snacks, stroller. Check, check, check, check. And we’re off to the zoo. Nora asks which direction we’re turning (right), and Sam wants to know how many minutes it will take until we arrive (24). I turn on the kids’ favorite Music Together CD, always starting with track 6, “Ram Sam Sam,” which keeps all three entertained for the next 15 minutes. Of course, Nora falls asleep right before we arrive.

1:30pm | I’m pretty excited to explore Turtle Back Zoo. I’ve heard great things, and we’re meeting a few friends, so it should be a fun afternoon. We all gather at the entrance, and the kids are thrilled to see their buddies. We spend the next two hours with reptiles, leopards, monkeys, giraffes, ostriches, llamas, wallaby, antelope, and bison. Nora’s favorite is the Komodo Dragon, Sam is impressed by the wing span of the Condoor, Evie loves the fishies and sea lions, and I am most entertained by the Sloth hanging upside down by tree branches inside the Reptile House. We find some shade near the giraffes, and I let Evie out of the stroller to explore while Sam and Nora run through the mist with their friends. Not surprisingly, my two kids get way more soaked than the rest of the kids. After snacks and potty breaks, the kids ask to find the playground. 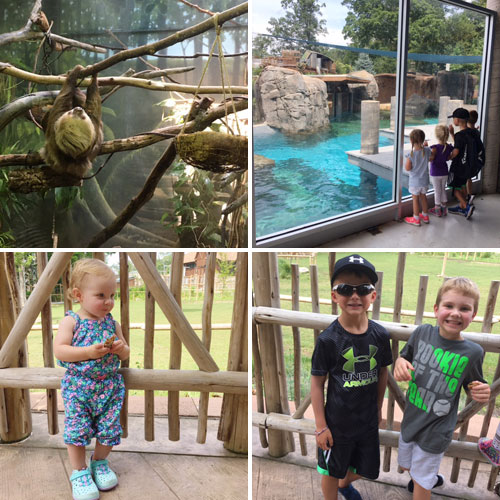 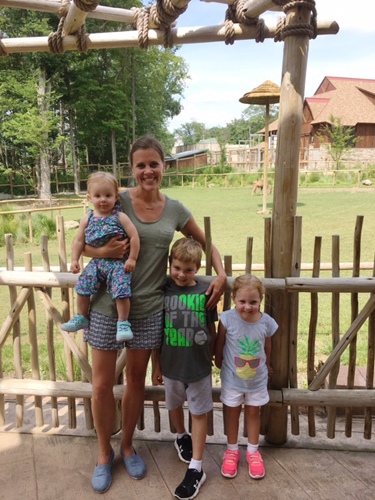 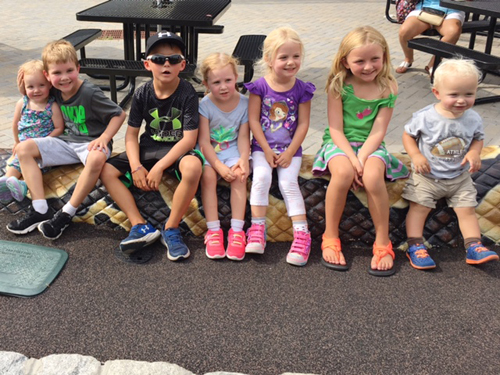 4:15pm | Time to head home. I call Nick from the car, and he says that he should be home just after us. Good. So I can get the kiddos into the bath tub while he starts dinner. I run the plan by them, and they agree, with the promise of pizza and a movie after.

4:45pm | Home again. And I’m happy with how quickly I get the kids bathed and into jammies. Then it’s into the kitchen to help Daddy make pizza while I shower. By the time I get downstairs, I’m sure that the kids have eaten more shredded cheese, sausage, and pepperoni than they have put onto the pizza. But I’m not going to complain! They’re content, and dinner is ready for the oven. 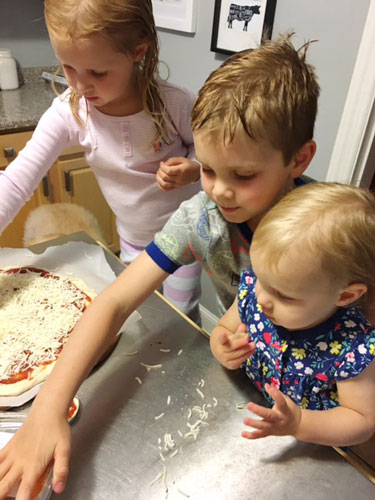 5:15pm | We decide on Beauty and the Beast for family movie night, and I think I’m more excited than the kids. I grew up with this story and have wanted to see the new adaptation since it hit the theatre. Nick serves up the pizza and promises to keep an eye on Evie so that I can actually watch the movie. Score!

7:15pm | I have zero pictures from the rest of the night. In fact, I’m not even sure that I brought my phone into the basement. Here’s a recap: Evie ate two slices of cheese pizza and more grapes than I could count. Sam and Nora barely touched their dinner until the movie was almost over. Nick and I each enjoyed a beer, because, Friday night! And we all loved the movie, even the “scary wolf parts,” according to Sam. All three kids took turns snuggling with me on the couch, while Lucy tried desperately to fit under the train table to get closer to the crumbs on the kids’ plates. Evie got noticeably tired with about 20 minutes to go, and Nick volunteered to take her upstairs. I joined with the big kids shortly after.

7:40pm | After brushing teeth and singing and dipping Sam in the hallway to “tale as old as time, song as old as rhyme …” it’s time to get the kiddos into bed. They willingly agree to skip bedtime books, which is very rare, and are all asleep within minutes of turning out the lights.

8:00pm | Whew. Time to unwind with Nick. After cleaning the kitchen, I grab my computer and a piece of dark chocolate and join him back downstairs. He watches last week’s episode of Game of Thrones while I start to type up my post.

10:00pm | And we’re ready to call it a night. A really, really great summer Friday is in the books.