The third one is supposed to be the easiest, right? The pregnancy, the labor, the delivery, the demeanor of the baby after birth. Well, not entirely.

I felt my first contraction before going to bed on Tuesday, May 31st. We were still two weeks from baby’s due date. So I didn’t expect it to turn into anything significant. Except that the contractions continued, 5-7 minutes apart, throughout the night.

I woke up Nick around 4am and suggested that we get ready for a possible trip to the hospital. I wanted to take a shower, and I still had to pack a bag (so different than the first when I was packed a month before he arrived!). And we had to call a friend to come and stay with the big kids. The contractions continued — bearable, but consistent — until our friend arrived about an hour later.

We arrived at the hospital just after 6am, and I was set up in a triage room with bands around my belly to monitor contractions and the baby’s heart rate. The doc confirmed that I was just 2cm dilated (what I expected to hear) and suggested that I do a few laps around the maternity floor to see if I progressed. After 2 hours, there was no change, and so we headed back home.

Nick took off the rest of the day because we were still hopeful that it might be baby’s birth day. We took Sam to school (and everyone wished us luck!) and enjoyed breakfast at the bakery with Nora. Then we made arrangements for another friend to take Sam and Nora for the afternoon and overnight. (Thank goodness for this village of ours!)

Despite having regular contractions all day, walking 7 miles around town, and eating spicy food for dinner, the baby changed its mind about coming out to play, and contractions subsided by the next morning. I was confused and a little discouraged. But I tried to focus on all the things I now got to do before he or she arrived.

Like enjoying Sam’s last day of preschool, an ice cream social, and lunch with friends. And a much deserved prenatal massage! All of the frustration and exhaustion that I felt earlier that week totally melted away.

Contractions started again on Saturday, but I tried my best to ignore them. I cleaned the house, did a few loads of laundry, walked to the grocery store, joined the community pool, and went to the park with the kids.

Nick’s mom arrived on Sunday. We were all so excited to see her — and felt relieved from the pressure of finding friends to cover for us if/when labor began. We grilled out and watched Sam and Nora race their bikes around the back deck. Nick picked up his brother, BJ, from the train station later that day, who was also joining us overnight after spending the weekend in NYC. We had a full house! Which seemed like the perfect time for baby to make its debut …

I woke around 5am on Monday, June 6th (my dad’s birthday!). And I immediately knew that the contractions had changed. How could I have forgotten what they really felt like?? I sat in the glider beside our bed and timed them for about an hour before I woke Nick. They were consistently coming every 4 minutes by the time he got out of bed. Yet he still asked if he should go to work. I guess I couldn’t blame him, considering the previous false alarms. But I assured him that today was the day!

We let Carol and BJ and the kids sleep in until about 7:15am. I ate eggs, and Nick drank a big cup of coffee. I re-packed my toiletries in my duffle bag and lined up everything by the front door. By 8:30, things were starting to pick up. Nick knew by the way I swayed my hips through every contraction — something I did both times before. I called the doctor, and she also believed it was time. I gave big hugs and kisses to Sam and Nora and told them that they would get to meet their new baby brother or sister later that day! 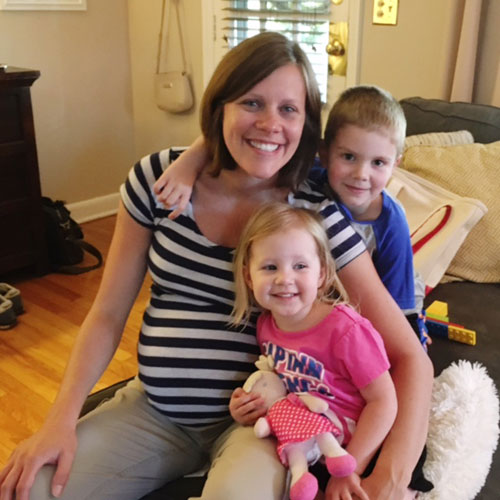 I was 4cm dilated when we got to the hospital and was admitted and checked into labor and delivery by 10am. We called my parents to tell them that Dad was going to get a new grandchild for his birthday! 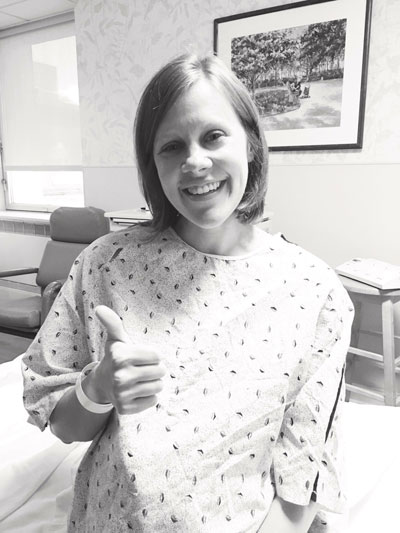 Between 10am and 12:30pm, I progressed from 4cm to 7cm. There was lots of hip swaying, a little bit of groaning, and a lot of requests for Nick to apply more pressure to my lower back. I was up and moving around the room the entire time, thanks to a wireless monitoring device. But I started to feel a little nauseous from the walking and heavy breathing. So I decided it was time for an epidural. Oh, the instant relief!

We heard an increase in activity in the room beside ours, lots of groaning and encouragement to push, and then the sweet, sweet cry of a newborn baby. I teared up, knowing we were just moments away from hearing the first cry from our own little babe.

Less than an hour after the epidural, I felt that very familiar urge to push. I called for the nurse who confirmed that it was go time! She could see the top of baby’s head (as well as a bit of dark meconium, which meant she had to take proper precaution and call the peds team).

It felt like an eternity before my doctor arrived. But then things happened fast! Sanitary cloths down, cart of medical instruments rolled beside my bed, newborn station set up, legs into stirrups. I pushed. And pushed. And pushed again. Then on the fourth push, I sat all the way up and watched that itty bitty body slip out of me and into the world. 1:46pm. I caught a glimpse of her little girl parts just as the doctor announced, “It’s a GIRL!” I looked at Nick, still squeezing his hand, and saw the surprise and overwhelming joy on his face. (He was convinced from the beginning that we were having a boy.)

And then we heard that beautiful sound — our daughter’s first cry. She was slimy and slippery, but the nurse placed her on my chest for a brief moment before they whisked her off to the other side of the room to be examined. I encouraged Nick to go with her. And, as they checked her, he confirmed that she was just perfect. 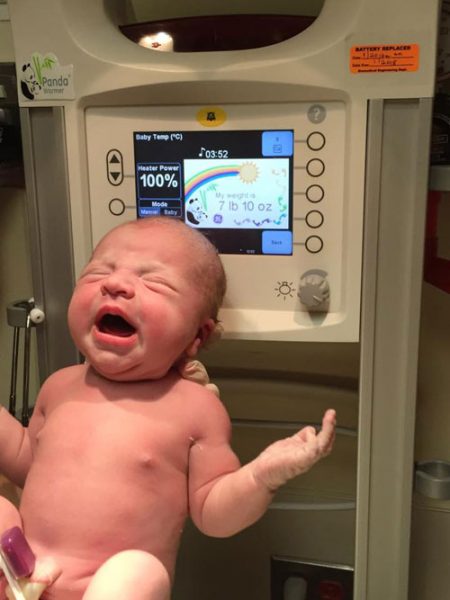 The nurses cleaned her up and wrapped her in a warm blanket before bringing her back to me. No matter the first time, the second time, or the third time, there is absolutely nothing like the feeling of your child in your arms. After months of dreaming of her face and the weight of her body outside of mine, Evie was here. Squeezing my thumb, looking into my eyes, her cries quieted by my beating heart and her breath syncing with mine. After a solid 20 minutes of nursing (like a champ!), Daddy got some time with her — another baby girl to love and to spoil. 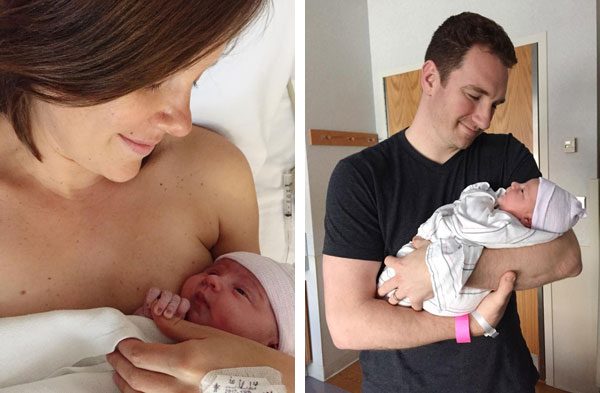 After about an hour in labor and delivery, we were transferred to our room in maternity. My lower body had still not recovered from the epidural, which meant they had to transport me in a wheelchair and assist me into bed. But it also meant that I felt no pain — yet!

We spread the news of Miss Evelyn’s birth with family and friends. And prepared for her to meet her big brother and big sister! Just before they arrived, I had my IV removed and was able to get up and move around. 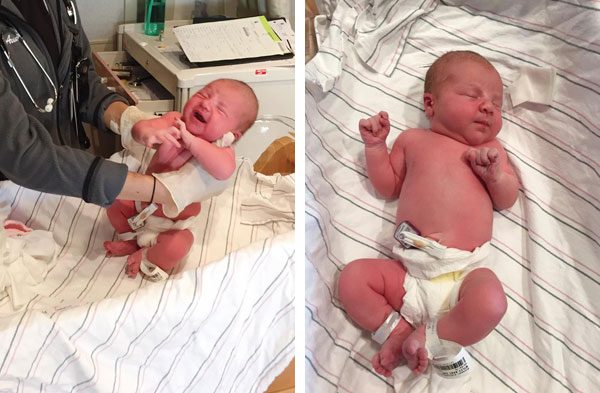 Carol and BJ came into the room first — to video and photograph the meeting of the siblings. Then Nick followed with two very excited kids. Sam was absolutely beaming. I’m not sure that I’ve seen such a proud and genuine smile since the day that Nora was born. Nora was a bit apprehensive, holding Daddy’s hand tightly.

They both walked over to my bed, and I asked, “What color is the hat?” (Because we had told them they would know if it was a brother or sister based on the color of the hat.) They said, “Pink!” And Sam said, “It’s a girl!” Then Nora immediately said, “I washed my hands. I hold baby now?” It was such an amazing and memorable moment for our little family. 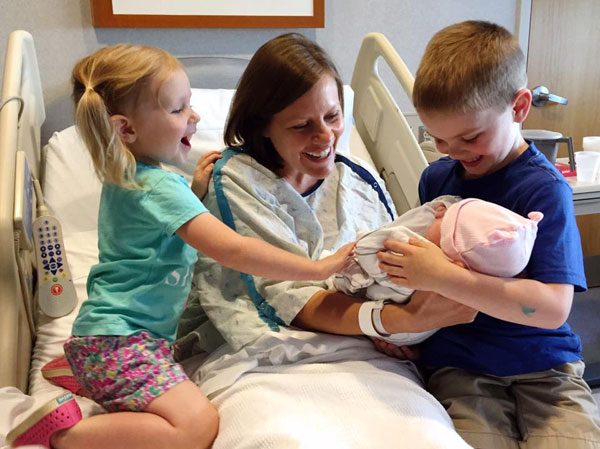 The kids spent the next 20 minutes taking turns holding Evie, touching her ears and nose, requesting to see her belly button and toes. They took pictures with their new cameras and introduced her to Ricky and Rexy. And BJ recorded the entire thing. What a treasure.

Then we had a picnic in my bed, which left sugar cookie crumbs and rainbow sprinkles spread across the hospital sheets. It was even better than I imagined it would be. 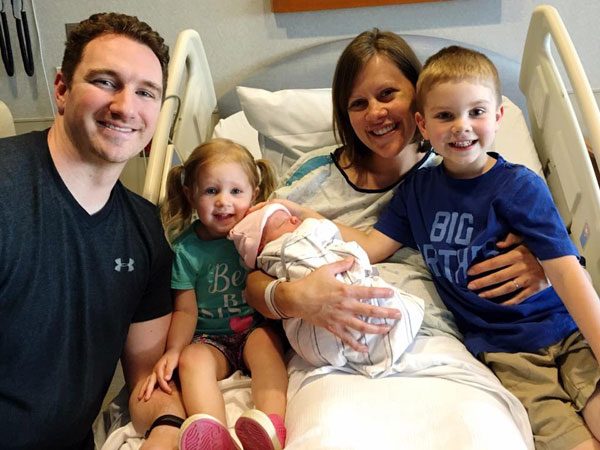 Oh, sweet Evie, you are such a lucky and loved little girl. Welcome to this crazy family of ours!